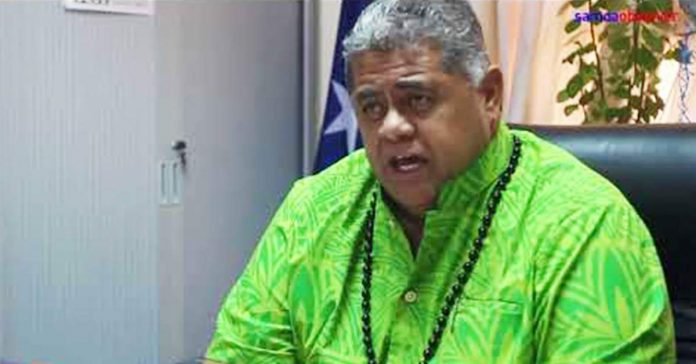 01 February 2019, Apia Samoa. Former Cabinet Minister and Speaker La’aulialemalietoa Leuatea Polata’ivao says that he is still a member of the ruling Human Rights Protection Party (H.R.P.P.) and he has no intention of resigning after he voted against the Government’s Electoral Constituencies Bill in Parliament earlier this week.

The former Minister of Agriculture was one of two Members of Parliament who objected during the ballot.

Laauli had raised concerns over the removal of a constituency in Savai’i under amendments which according to a government press statement, realigns electoral constituencies in an attempt to overhaul the entire electoral processes and help eliminate corruption and illegal practices.

Speculation over Laauli’s future arose following comments by Prime Minister Tuilaepa Sa’ilele Malielegaoi during his weekly media conference.. The leader of the HRPP said that he had written to La’auli to thank him for his services to the political party.

“I wrote to thank him for removing himself from the party,”

“I thanked him for making that decision and we happily accept his resignation.”

The Prime Minister suggested that HRPP members were unable to freely vote in Parliament, saying that there were ‘bylaws’ that had to be respected when it came to the position of the party on certain issues.

He said La’auli’s vote against the Government’s position was his way of exiting the party.

“He has made his decision and under our by-laws, it’s an indication that you have officially resigned,” Tuilaepa said.

However, in an interview with Samoa Global News, the Member of Parliament from Gagaifomauga No.3 confirmed that he has received no such letter from the Prime Minister insisting that he is still a member of the HRPP party.

“So I still insist that I am still a member of HRPP and as far as I’m concerned ou te lei fa’amavae.”

“We would have to have a look at the law to see if members are able to be ‘voted out’ from Parliament” added Laauli.