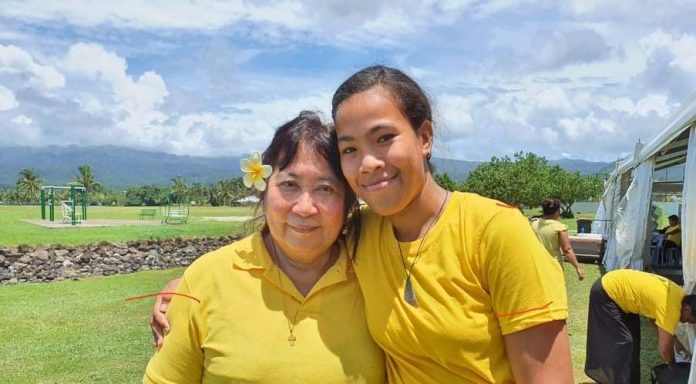 Leilua Lino is a child survivor who shares her story 11 years after she was sexually abused, because she wants to help eradicate violence towards children in Samoa.

Speaking to the participants of the 84th Extradordinary Session of the UN Committee of the Rights of the Child during a side event on Child Protection held at the Taumeasina Island Resort in Apia, Leilua challenged others to speak out in order to stop sexual violence towards children of Samoa and the Pacific.

“Why do I share my story? Why do you think?”, she asks as she challenges the to audience to interact with her.

“Because I don’t want other chidren to be abused like me”.

Now 20, Leilua was only 9 years old when she was sexually violated in her home by her own biological father.

“I was silent and I was scared”.

Leilua said she told a friend what had happened to her and from that intervention, was taken to the shelter of the Samoa Victim Support Group to await the Court process against her perpretrator.

She has been staying with SVSG for the past 11 years.

“At SVSG I have my Mama Lina and lots of brothers and sisters”.

The participants heard that gardening was used as part of Leilua’s therapy at the SVSG compound at Tuanaimato.

“I continued to be an angry child, but my family never gave up on me.”

“I created a garden. I am always at peace when I’m in the garden.”

Siliniu Lina Chang, affectionately known as Mama Lina said they had tried to reintegrate Leilua back into her family environment after the Court case where her father was sentenced to over 20 years imprisonment.

“It was very hard for her. She lasted three days, and then came right back to us”, said Siliniu.

“There was a lot of judging of her out there;  her family and village treated her differently;

“So she cried and wanted to come back, to where she feels safe and loved and not judged by others who stare and give her dirty looks”.

Also speaking at the side event today, Siliniu Lina Chang said they will continue to share at such public events despite the heavy heart of seeing children’s rights being violated.

“The trauma, the pain, the mistrust, the anger and the uncertainty is all very disheartening;

The President of the Samoa Victim Support Group said the high prevalence of exploitation of kids through child labour seen in Apia and Salelologa was a direct result of poverty, lack of education, high rates of violence at home and lack of awareness and understanding of the issues.

Siliniu told the Committee of the Rights of the Child that and the participants of the open side event that the work of the organisation will continue despite the lack of resources.

“We will continue this service from the heart;

“We will continie to be the voice for the children. We will continue to be parents to the neglected and a refuge for the abused children of Samoa”.