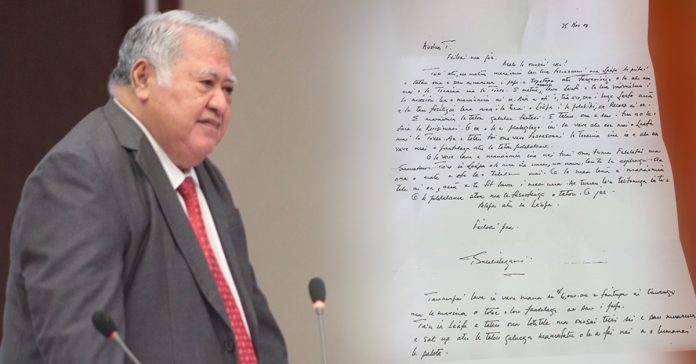 12 March 2019, Apia Samoa. Prime Minister Tuilaepa Dr Sailele Malielegaoi has reissued  a statement originally sent out a year ago when a letter implicating him had surfaced on social media.

The letter which is addressed to ‘Auelua T’ is disjointed in its structure, and ambiguous in its meaning on much of its wording. It is then signed in what looks like a bad attempt to forge the PMs signature.

An Australian based man who goes by King Faipopo on social media, then used the letter as a basis of his claims that the Samoan Prime Minister was involved in the assassination of the late Luagalau Levaula Kamu, a devastating crime in the history of Samoa for which 2 cabinet ministers at the time were found guilty. Toi Aukuso and Leafa Vitale were bot sentenced to life in prison together with Leafa’s son who had pulled the trigger.

The Samoa Prime Minister lay a complaint with police and King Faipopo has been charged for publishing wrong and misleading information.

Today in Court, King Faipopo pleaded not guilty to all 13 charges involving actions which Samoa Police say are a form of cyber bullying.

The Prime Minister’s office has re-issued a statement orginally sent out a year ago, where Tuilaepa highlights how the letter in question is a forgery believed to have been written by a prisoner over 20 years ago.

“I have been told that the 20 year old letter was penned by a prisoner and it was proven at the time to be a fake.

“My officials are now revisiting the matter to reconfirm if this is the case. But this is the first time I have seen the letter and it’s a forgery.

“First, it’s addressed to Auelua T. and as far as I know I am the only Auelua T. or Auelua Tuilaepa, so I can’t be writing a letter to myself.

“Secondly, the fake letter is also dated November 25th 2007 but I was not bestowed the Auelua title until 2015. And anyone who has read my writing, knows that these are not my words because the letter’s contents are ambiguous and do not make sense to any sane human being. Even I am confused to what the letter is trying to portray.

“And my signature is clearly a forgery.

“This is not the first time that some people have forged my signature and they were duly charged convicted and served time in prison.

“In the meantime, I am not fazed and remain firm that the truth will prevail and whoever is behind this sinister plan to incite and create chaos will face his day in court.

“My officials have been tasked to bring an end to this nonsense on social media. It is a threat to public security because when one’s reputation is slandered and defamed without just cause or proof, it will also impact the pride and integrity of families and relatives which may provoke anything to happen.”

This statement issued by the Prime Minister Tuilaepa Lupesoliai Dr. Sailele Malielegaoi today in response to media inquiries into a letter posted on the social media implicating him and two former Cabinet Ministers Leafa Vitale and Toi Aukuso sentenced to jail for life imprisonment for the assassination of the late Minister of Works, Luagalau Levaula Kamu.

Toi Aukuso passed away in prison in April 2009 while Leafa was released on parole for health reasons in 2010. The letter is believed to have been penned in 2007 while the two men were serving their life terms.