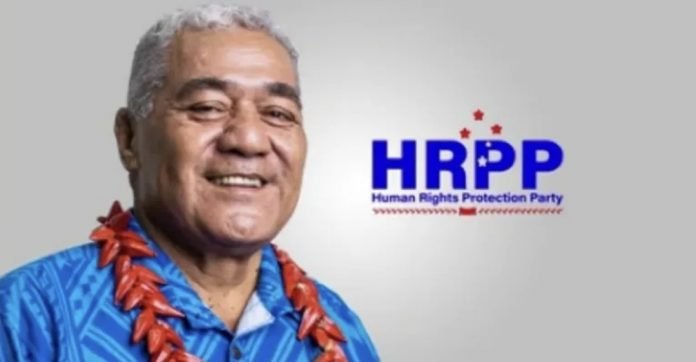 Aiono Tile Gafa has emerged the winner of the much awaited Aana Alofi 2 parliamentary seat after today’s preliminary count of special and pre-polling votes.

At the end of polling day on Friday, Human Rights Protection Party’s Aiono Tile Gafa was a mere 9 votes ahead of Faatuatua i Le Atua Samoa ua Tasi’s Lolomatauama Eseta Faalata. The election was too close to call however, after the complete count of special and pre-polled votes, Aiono stretches his lead to 19 votes, registering 412 votes to Lolomatauama’s 393.

Aiono Tile Gafa is no stranger to the political arena, having run in previous elections, often against then Speaker of the House Toleafoa Faafisi, before re-alignment of boundaries and back when there was just a single Aana Alofi 1 constituency.

Lolomatauama Eseta is one of only two woman candiates who competed in the six by-elections for Samoa.

The result means two women will enter Samoa’s Parliament through the special measure. Lolomatauama Eseta will now vie for the two women’s seats to be calculated by percentage of total votes casted in their respective constituencies. The final result has Lolomatauama with 34.996% of total votes casted in her constituency.  This result is however, behind HRPP’s woman candidate Aliimalemanu Alofa Tuuau with 40.03%, and FAST woman candidate, Toomata Norah Leota with 35.45%.  The other woman in the running is  Human Rights Protection Party candidate, Faagasealii Sapoa Feagiai, whose final percentage will be known later today when the final count is complete.

The final count for the six Constituencies continues at Tuanaimato, attended by secretaries (failautusi) and committee members of all candidates. Electoral Commissioner Faimalomatumua Mathew Lemisio says the final count should be completed later this afternoon.

Samoa Global News is on site at Tuanaimato and will be reporting results as they become available.