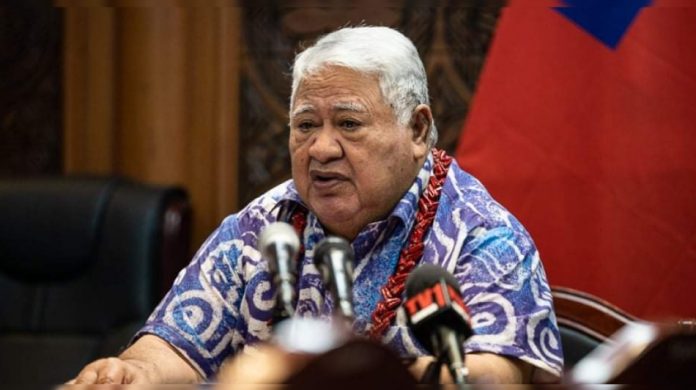 Wednesday 27 April 2022, Apia Samoa. The Human Rights Protection Party (HRPP) has welcomed the release of ST$25.6 million talā (US$10million) grant announced this week by the Asian Development Bank as direct budget support for the Government of Samoa’s response to the COVID-19 community outbreak.

ADB had yesterday confirmed the grant is provided under its Pacific Resilience Program, aimed at filling financing gaps often faced by developing Pacific Island member countries during crisis such as the Covid-19 pandemic.

In a press statement distributed this afternoon, HRPP Leader, Hon Tuilaepa Dr Sailele Malielegaoi expressed his appreciation for the timely assistance from the ADB for Samoa, and reminded that Samoa is one of the bank’s founding members.

In the same statement, however, the opposition leader has called for more timely situational reports on the developments of the government efforts in fighting the COVID-19 pandemic.

“The country needs to know the full extent of what we are facing,” said the leader of the opposition.

Tuilaepa says he is concerned about conflicting reports, “especially the total number of Samoans who have passed away on covid related causes”.

He said he was concerned that the press release from ADB dated 25 April 2022, quoted “out of date information” about Samoa’s current status.

“Our donor agencies deserve to be given up to date data to help them make important decisions on assistance to help us deal with problems we are facing,” said Tuilaepa.

The ADB press release issued on the afternoon of 25 April had included Samoa’s situational report as at Wednesday 20th April – stating the total cumulative number of Covid-19 cases from border and community stood at 7,185.

The numbers was the total reported by Samoa’s Ministry of Health last Friday April 23rd stating total cases of 7,185 as at 2pm last Wednesday 20th April 2022.

On Tuesday afternoon 26th April an updated “weekly” situational report was issued for the first time, giving a bulk total for a 7-day period and showing that Samoa’s total cases had in fact, reached 8,351.

The MOH situational analysis stated there had been three more covid related deaths to take Samoa’s official death toll to 16, however, a disclaimer was added in relation to deaths, that “there are other deaths among registered cases that are not primarily caused by COVId-19”.

This afternoon, however, just before midday, a revised situational report was distributed by MOH.

This time, and for the first time since the pandemic, a comprehensive set of information was distributed, including an analysis of the 16 deaths by age, comorbidities, and whether they had been vaccinated. It stated the average age of the 16 recorded deaths was 71, and claimed that 9 out of the 16 had been unvaccinated and only 5 had received two doses.

Earlier this month, family members of one of Samoa’s 16 cases spoke out through Samoa Global News, claiming an MOH report had declared Figao Sone was unvaccinated, when he had received both doses. The family provided Figao’s vaccination card and said it was important to them to make the correction on record.

The revised report by MOH issued today has also, for the first time since the outbreak, highlighted villages and workplaces where cases had been detected since the 17th of March 2022.  Faleata and Vaimauga being the most densely populated urban areas of Upolu accounted for almost 52% of all cases in Upolu while Palauli district was the worst hit of Savaii, accounting for 24% of cases on the Big Island.

The additional information now had a summary of the three new deaths, all being male above the age of 70.

“An elderly male of 73 years old with known comorbidities, who had completed 2 doses of a COVID-19 vaccine and yet to receive a booster. He died on 17th April from severe
COVID-19 pneumonia; A 76 year old male with a diagnosed comorbidity, who was unvaccinated and died 19th April; and A 70 year old male with known comorbidities, who only completed 1 dose of COVID-19 vaccination and died 22nd April”.

The number of other deaths among registered cases which the MOH have stated are not primarily caused by COVID-19, is not given in the detailed weekly summary.