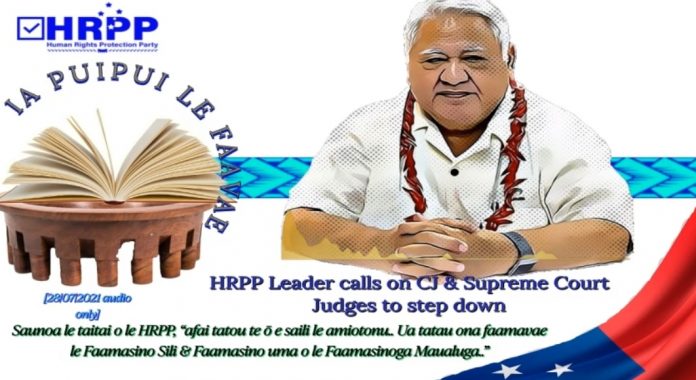 Thursday 29 July 2021 Apia Samoa. The Human Rights Protection Party (HRPP) have announced two protest demonstration events to be held in the coming days, to oppose recent judgments handed down by the Samoa Judiciary which outgoing Prime Minister Tuilaepa Sailele Malielegaoi says are unlawful and unconstitutional (piopio, solitulafono, solifaavae).
“The purpose of this march is because the Chief Justice has destroyed the Constitution of Samoa”, states a post on the HRPP’s official Facebook page.
“O le mafuaaga o nei solo, ona ua talepe e le Faamasino Sili le Faavae o Samoa”.
The first event is a parade of cars planned for Friday 30th July 2021, and the second is a peaceful march at 10am on Monday 2nd August 2021, from the seawall across Sheraton Hotel.
The events are being promoted with a poster of Hon Tuilaepa Sailele quoted as saying, “If we are going to seek justice, then the Chief Justice and all Supreme Court justices should resign.”
“Afai tatou te o e saili le amiotonu, ua tatau ona faamavae le Faamasino Sili, ma Faamasino uma o le Faamasinoga Maualuga.”
The two events are also being promoted on TV1 Samoa through a 3-minute video calling for Samoa to stand up and protect their Constitution, which according to the HRPP party, the Judiciary have failed to uphold.
In promoting the protest events, HRPP advocate and lawyer Maiava Visekota Peteru says it is not the role of the Court to appoint the government.
“If there is something that we know is not right, we must stand up. Many people are messaging us to not give up”, said Maiava.
In a letter dated 2 July 2021 to the Judicial Service Commission, the HRPP party filed a formal complaint against members of the Samoa Judiciary, calling the Chief Justice ‘incompetent’ in handling cases and claiming the Judiciary were colluding in their decisions and working together to ‘oust’ HRPP from government.
With Parliament not convening since the April 9th general election, the Courts were the only fully functioning arm of Samoa’s three-pillar Government structure during a four-month long political crisis.  Since the April 9th general election, Samoa’s Supreme Court and Court of Appeal have dealt with various Constitutional matters such as the legality of an additional woman MP, a snap election called by the Head of State, the suspension of a Proclamation to convene Parliament, and the legality of a swearing-in held under a tent outside a locked Parliament House. In addition, the Courts have had to set aside all other cases to prioritise 28 post election petitions and counter-petitions, alleging bribery against elected MPs.
The Human Rights Protection Party has been in power for most of the past 40 years, and Outgoing Prime Minister Tuilaepa Dr Sailele Malielegaoi led the government of Samoa from November 1988 to Friday 23rd July 2021, when a Court of Appeal decision declared the FAST political party to have gained the support of a majority 26 elected members of the Legislative Assembly following the April 9th general election.
However, the leader of HRPP believes the people of Samoa chose the Human Rights Protection Party because they won in percentage of votes casted. Due to the larger number of HRPP candidates in the general election, the OEC reported that HRPP received over 60% of votes casted.
The FAST party led by former Deputy Prime Minister Hon Fiame Naomi Mataafa took office on Tuesday 27th July 2021 with a first meeting of Cabinet, followed by the swearing in of Associate Ministers on Wednesday 28th July.