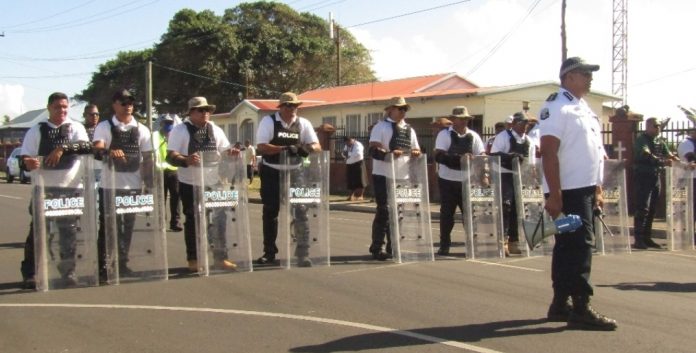 Members of the Samoa Police Service wearing riot gears, and holding up guards of armour ignited anger amongst some senior members of Human Rights Protection Party as they tried to negotiate their way through the barricades this morning.

Member of Parliament for Vaimauga 1, Sulamanaia Tauiliili Tuivasa reacted when he saw a group of police in riot gear running toward them, forming an additional line of defense against HRPP members, who requested to walk peacefully up to Parliament House as a stance to the Speaker’s decision to deny them entry to the Maota Fono. A further public notice from the Speaker advised that the public were prohibited from entering any part of Parliament grounds, including the malae infront of Parliament House. As a result Police blocked the road into the Mulinuu peninsula on Tuesday morning. By 9am no vehicle was permitted to enter from as far back as Tanoa Tusitala Hotel.

“What are those? Why are you running towards us with those gears? We are not criminals!..come on!” shouted Sulamanaia, notably upset at the suggestion they needed to be dispersed as rioters. 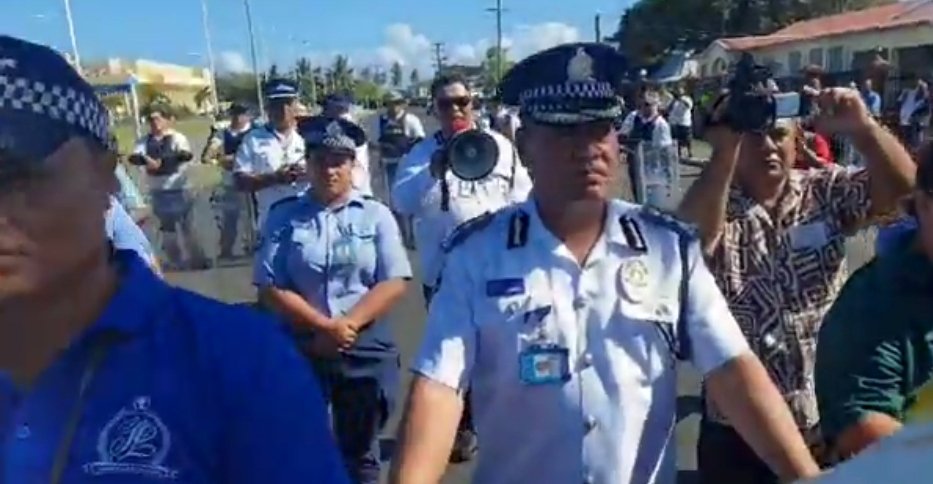 A Superintendent spoke in oratory Samoan to the elected HRPP members to calm the situation. “We look to God for his peace.. Tuisamau, I am also a Tuisamau, we look to you to work together for peace. Please know that we are just doing our job”.

The HRPP members had already left their supporters about 50 metres back, behind another barricade heavily guarded by Police, and only the elected MPs were allowed to walk through. However, they did not get more than 100 metres, when another barricade was formed, and the police riot unit ran in to assist and send a firm message of entry denied. 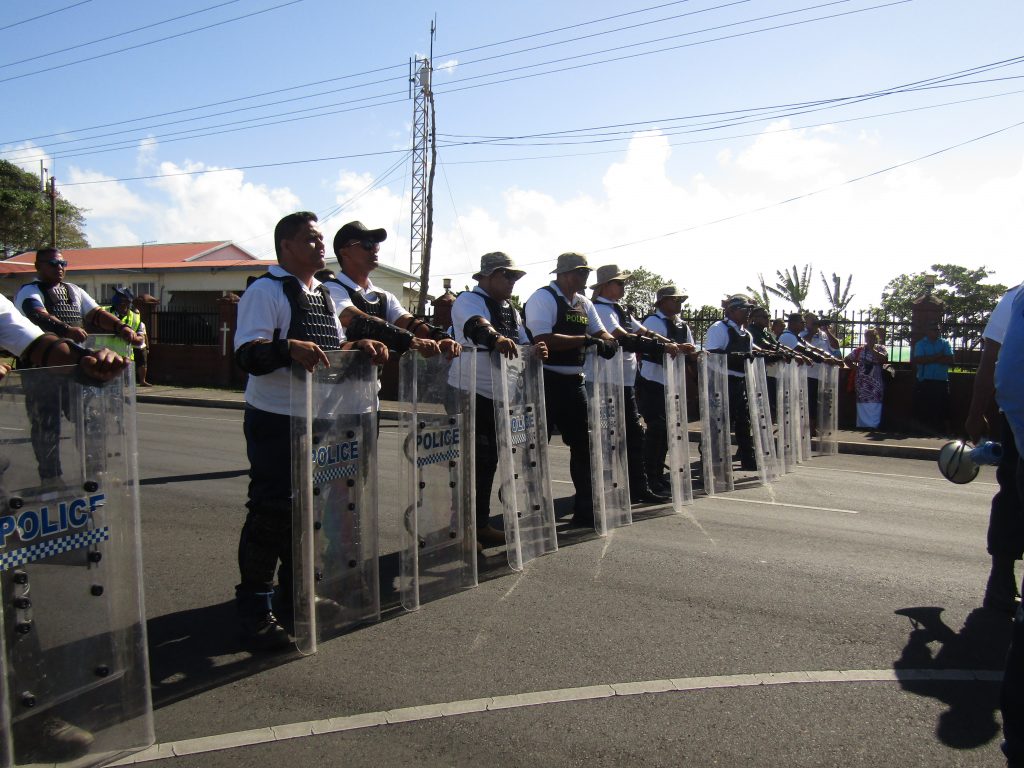 Fuimaono Sam Te’o, former MP for Falealili also expressed disappointment to see the riot police unit. “This is such a disgraceful sight (referring to riot gears).. we are not the criminals you should be focused on”, said Fuimaono.

Fuimaono also spoke up to calm Sulamanaia. He acknowledged Police were doing their jobs, and obeying orders from the Government and Speaker of the House.

Shouting over a line of police standing behind barricades, Sualamanaia quickly calmed himself down from the momentary outburst.

“It’s ok. It’s over. Just why did you have to run over here in those gears?”.

HRPP Secretary and member of Parliament since 2006, Lealailepule Rimoni Aiafi pointed out that they were walking peacefully, and that their supporters had been turned back.

Earlier before the HRPP members marched from Petesa, party leader and former PM for Samoa Tuileapa Dr Sailele Malielegaoi made it clear to their supporters that they would be turning back from wherever police would stop them.

Tuilaepa also intervened when tensions ran high, and stepped out of his car to calm members of his party.

“This happens to all of us, when we are upset and these things arise out of heightened tensions it is hard to remain patient;

“But this is a public road. Never before have protest marches in Samoa been stopped, and citizens not allowed to access public roads,” said Tuilaepa.

The HRPP leader went on to mention historical protests against the government over the years, that were allowed by the HRPP government to proceed, without hindering the rights of citizens to assemble and walk on public roads.

“Now we have no voice in there. And they will pass the budget quickly today without proper debate,” said Tuilaepa who also questioned the quorum being met.

“But today we come in peace, we will rest here under this ulu tree and tapuai today’s Parliament session”, said Tuilaepa as he led his group of elected MPs to rest under the shade of nearby trees along the side of the road. 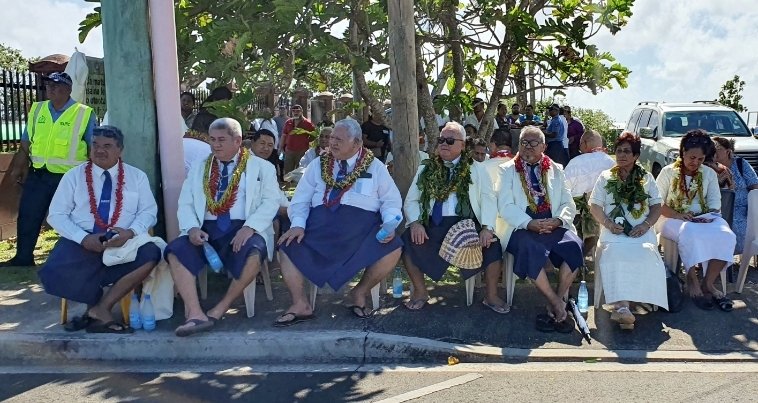 Speaking to the media, Sulamanaia said they are elected MPs chosen by their respective districts, and they wanted to be in Parliament today to debate the government budget.

“We don’t come to create any unrest, no. We have been elected, and we do want to walk into Parliament House because that is where political debate must take place,” said Sulamanaia.

“We are sad this morning that we, as leaders, have been blocked here. It is sad to think that future generations would see this and what would they take from this?,”

“But we also thank God that there is still peace and no unrest. We humble ourselves and await a way forward,” said Sulamanaia. “Thank you Samoa for your support. We stand together to fast and pray for Samoa,” said Sulamanaia.

HRPP’s elected MP’s returned to the Petesa Headquarters after waiting for some time, however, could not enter Parliament grounds.

The 26 FAST MPs including the Speaker were sworn in on the 24th of May 2021, the 45th day after general elections however, 25 HRPP MPs elected at the April 9 general elections refused to attend without the 6th woman MP that would have leveled their numbers to 26 at the time. At least 7 HRPP members have since lost their seats or resigned since the April 9th general election, however Tuilaepa says they still all need to enter Parliament, where their resignations or removals by court order can be made official and formalised.

Tuilaepa spoke again at Petesa HRPP headquarters on Tuesday afternoon, telling his HRPP supporters to stay calm and to return to their respective villages to await an update on the future of HRPP elected MPs, still not sworn in and unable to participate in Parliamentary debates.