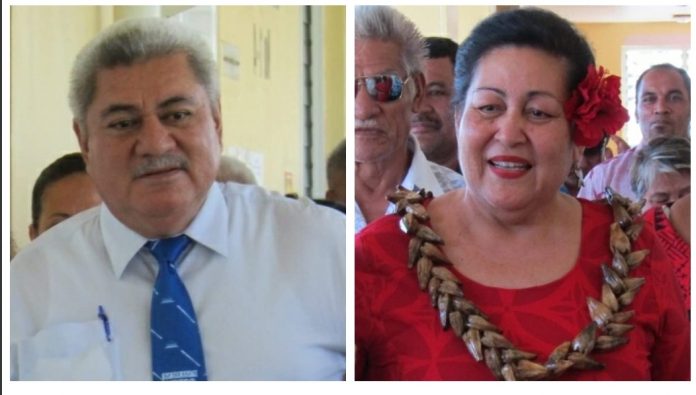 The Deputy Leader of HRPP and veteran politician Lauofo Fonotoe Pierre Nuafesili Lauofo has been cleared of six bribery charges brought against him by FAST woman candidate and businesswoman, Toomata Norah Leota.

“The petition is dismissed in it’s entirety”, reads the judgement.

In respect of the counter petition against Toomata Norah, the Supreme Court also dismissed all charges of bribery brought by Lauofo in relation to meetings held with the villages of Salelesi and Eva. They also dismissed all five allegations of bribery relating to a FAST roadshow held at Solosolo within the period of election that began on the 10th of March 2021.

“The one allegation of bribery on the 6th April at Salelesi village is dismissed.”

The five allegations of bribery at the roadshow at Solosolo are dismissed. But we do find that pursuant to section 100(2) the petitioner is guilty of illegal practice for the 7 envelopes of cash given to the villages of Leusoalii, Luatuanuu, Salelesi, Eva, Fusi, Saoluafata and Solosolo.”

Justice Lesatele Rapi Vaai stated that the money given by the FAST Party during the roadshow is considered a breach of Section 100 of the Electoral Act 2019.

“Section 100 creates a strict liability offense which is punishable under section 103. It imposes an absolute prohibition to the giving or exchange of food, money, fine mats or other valuable at a ceremony or activity except at a funeral during the period of election.

The judgment highlights that because the FAST roadshow was held three days after the period of election commenced on the 10th of March 2021, then the presentation of envelopes of money and food at the Roadshow was an illegal activity under the Electoral Act 2019.

In relation to Section 100, their Honours made a note that Counsels of both sides had overlooked this section of the Electoral Act.

Outside Court, counsel for Toomata, Alex Su’a said the charge of illegal activity does not affect his client’s candidacy at the April 9th general election. According to Su’a, Toomata’s election results of attaining 33% of votes casted has not been affected by the ruling, and Toomata is still in the running to make up the minimum number of women in Parliament.

“The charge that she has been found guilty of, does not affect her candidacy”.

The HRPP Deputy Leader and former Deputy Prime Minister did not wish to address the media outside Court, but said there would be a later time made available for interviews.

Toomata Norah braved the media questions and cameras, to acknowledge the Constituency of Anoamaa 2, and thanked the FAST Party as well as her family for their ongoing support.

During proceedings warrants of arrest were issued by the Supreme Court against witnesses for the petition whe they failed to appear in Court.  Alex Su’a for Toomata had no choice but request the withdrawal of charges 5A, 5B, 5C, 5D and 6X on the charge sheet.

The full judgment can be read here.