The Human Rights Protection Party (HRPP) are awaiting a response from the Speaker of Parliament, Papalii Li’o Ta’eu Masipa’u, on the status of its elected members ahead of the upcoming Parliamentary sitting.

HRPP leader and former Prime Minister Hon Tuilaepa Dr Sailele Malielegaoi suggested there could be civil unrest at the upcoming Parliamentary sitting if a solution were not agreed to.

“We are all trying to avoid a head-on clash because the consequences can be extremely unpleasant,” said Tuilaepa.

Samoa’s Parliament has been called to convene next Tuesday 14th September 2021 and according to Tuilaepa, HRPP members have not received invitations to attend.

It is the first parliamentary sitting since the tent swearing-in of 26 FAST MPs on Monday 24th May 2021, declared constitutional and lawful  by the Court of Appeal. Hon Fiame Naomi Mataafa was sworn in as Prime Minister of Samoa that day, as was the Speaker of the House and the PM’s named as Cabinet Ministers.

The tent swearing-in was held at the height of Samoa’s political impasse between two rival political parties – the HRPP who had been in power for the most part of the last 40 years, and the newly established Fa’atuatua i le Atua Samoa ua Tasi (FAST) party, now the Executive arm of the Government.

Hon Fiame Naomi Mataafa was sworn in as Samoa’s first woman Prime Minister that day, the 45th day since Samoa’s April 9th general election, together with the Speaker of the House and all Cabinet Ministers.

The 25 elected members of the Human Rights Protection Party had refused to attend that day, insisting the 6th woman, who would take their number to 26, also needed to attend. A Court of Appeal decision, however, ruled the 6th woman seat could only be selected and appointed after the results of any by-elections that would follow court petitions.

Samoa’s Constitution requires the Head of State to call Parliament to convene within 45 days of a general election, however, it is silent as to the consequences, if a Head of State should fail to do so, as Samoa had experienced during its recent political crisis.

Next weeks highly anticipated Parliamentary sitting would be the first since the 24th of May and to date, all HRPP elected members remain not yet sworn in.

According to the HRPP leader, a major concern for them is that none of their elected party members have received invitations to attend next week’s Parliament sitting. 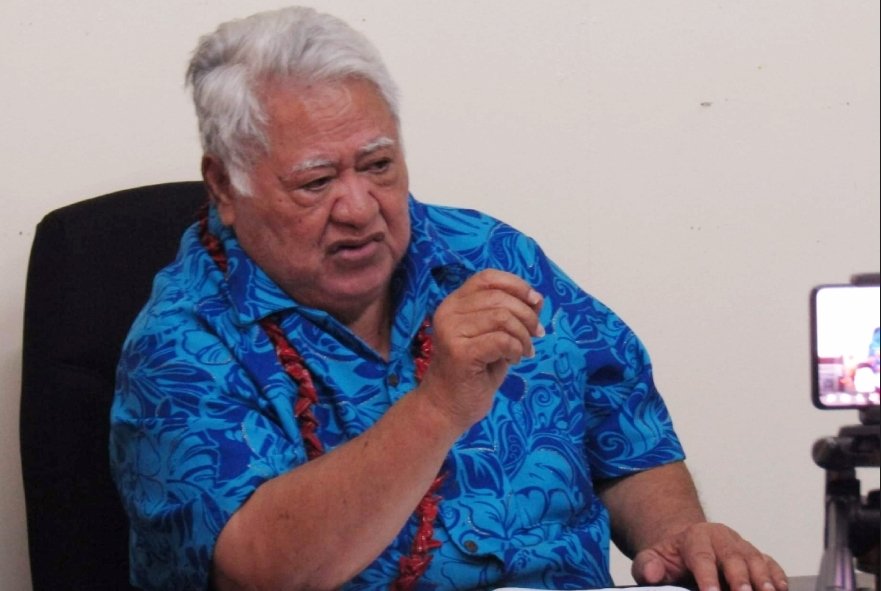 “The circulation of the notice to their members only is unheard of before in our country,” said Tuilaepa.

This was a further attempt to negotiate their position since the Speaker’s written response widely publicised on Monday.

According to Tuilaepa the Speaker empathised with their situation during their face to face meeting, and was appreciative of some of the issues raised during discussions.

“I think the Speaker came to understand more of our concern and he could see where we are coming from,” said Tuilaepa.

“We are all trying to avoid a head-on clash because the consequences can be extremely unpleasant..

“I think he thought we were unreasonably aggressive.. but he was very impressed when we made mention that all we are just trying to exercise our rights as Members of Parliament,” he added.

The contentious issue is around HRPP’s request for the Head of State to be present in Parliament, and re-swear in the Speaker before he swears in HRPP MPs.

On this issue the Court of Appeal judgment considered the Head of State’s role in administering the swearing-in of Legislative Assembly members, as ceremonial.. “The Head of State’s administration of the oath brings gravitas to the occasion”.

Tuilaepa however remains firm in his position that the Courts had not made the right decision by legalising the swearing-in ceremony of FAST party members, saying that to them it is still unconstitutional because it was done at the wrong place and time and attended by wrong people.

“What has happened is unfortunately to me, an oversight by the Courts,” said the HRPP leader.

In the lead up to next weeks Parliament and while they await a further response from the Speaker, HRPP have publicly announced they will be attending, and have openly called on their constituencies to also be at Mulinuu Maota Fono on that day.

“It is an important occassion that is attended by not just family but all members of the constituency, because they are proud to be delivering their elected MP to Parliament House..

“We will be attending because there is no law against it.. all our districts have been notified and will also be attending”.

Tuilaepa says all HRPP members will meet this coming Friday to discuss their plans on attending the Parliament Session on 14 September, and believes the Speaker would have his response for them by then.