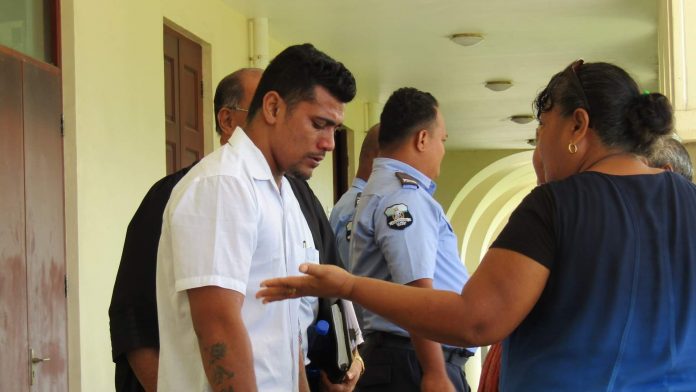 Justice Mata Tuatagaloa rebuked the behaviour of a father and husband charged with attempting to murder his pregnant wife, attacking her while she held onto her 2 year old baby girl.

The Court heard that on the 27th of June last year, Luaipou Fidow, 28 years of Fogapoa Savaii was having a drinking session with his friends at the couple’s fale. When it got late, his wife asked him if they could move with his buddies, suggesting they go to a nearby house with a pool table, so the young children aged 4 and 2, could prepare for bed.

This angered the accused who then took a hammer and walked towards his wife. The victim managed to remove the hammer from her husband but he punched her repeatedly with closed fists instead. His friends advised him to stop.

“Do you want to be killed?”

He also yelled back, “You are overly disrespectful towards me. This is the night you will die.”

While the victim was putting the children to bed she heard the voice of her young 4 year old daughter say, “Mom the knife!” “Mom le naifi!”

Luaipou struck his wife causing part of the skin to her ear to be severed. The Court heard that this caused the victim to bleed profusely. She took her baby and walked away. Family also tried to calm down the accused who then walked to his sister’s house nearby.

However the Court heard that Luaipou returned and saw his pregnant wife sitting holding her 2 year old baby. He then continued to beat her again.

He walked away and returned with a brick. His wife saw this and ran, still holding her 2 year old.

The Court heard that the victim felt weak from loss of blood and called to her husband’s sister for help. She was then taken to the hospital for treatment.

In delivering her sentence in the Supreme Court yesterday, Justice Mata Tuatagaloa challlenged the accused on the sacred space of traditional culture and traditions.

“Do you not understand that your wife is someone’s beloved sister? The apple of someone else’s eye?”

“How would you feel if someone did this to your sister?”

Justice Tuatagaloa condemned the actions of the accused, telling him that he had taken no regard of the young daughters aged 4 and 2, and the fact that his wife was with child.

Justice Tuatagaloa made reference to the public awareness programs being carried out by various government and development partner agencies try and combat domestic violence, expressing her disbelief at the behaviour, mindset and attitude of the accused before her.

Luaipou was sentenced to 8 years and 8 months for the attempted murder of his wife.