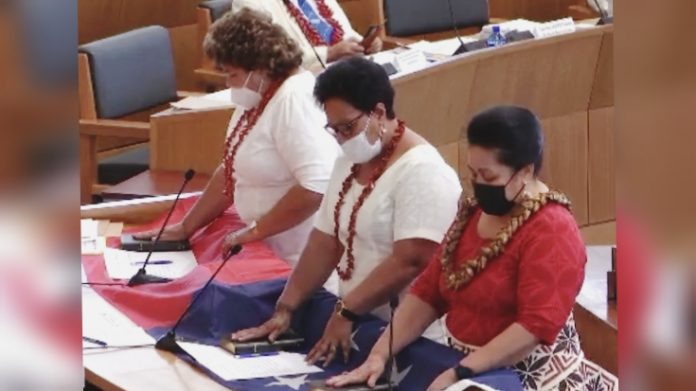 The historical swearing-in of three additional members of Parliament by application of Article 44 of Samoa’s Constitution was held at the Maota Fono this morning in a special sitting with family, friends and constituency members of the new MPs present. It is the first time that two women MPs are sworn-in to satisfy the constitutional requirement of 10% seats for women, and the first time that Article 44(1)(E) is applied to ensure a women who wins at a general election but later vacates the seat, is replaced by another woman.

Aliimalemanu Alofa Tuuau, Faagasealii Sapoa Feagiai and Toomata Norah Leota were finally able to be sworn in after a Supreme Court decision was handed down on Wednesday 11 May, declaring that the swearing-in is constitutionally required to be carried out at the earliest opportunity, “there being no constitutional or other legal basis by which the swearing in should be further delayed or deferred”.

The Speaker of the House, Papalii Lio Taeu Masepau announced that the additional members of the Legislative Assembly were appointed under Article 44(1)(A) of the Constitution of Samoa, and Section 84(2) of the Electoral Act.

The Speaker then announced that under 84(2) of the Electoral Act, the Head of State has issued a warrant dated 30 November 2021, for the appointment of Faagasealii Sapoa Feagiai as a Member of Parliament from Monday 29 November 2021.

Finally the Speaker announced a warrant signed by the Head of State on Wednesday 11 May 2022, declaring Toomata Norah Leota as a Member of Parliament, under Article 44(1)(A),(B) and (E) of the Constitution of Samoa.

A loud applause was heard throughout the Maota Fono after the three women MPs took their oaths.

Prime Minister Hon Fiame Naomi took the floor, to acknowledge that the road travelled by the women MPs was not easy. The Prime Minister made reference to the debate that the application of the laws has ignited, however, said that the main purpose of the Constitution, is to allow for the voice of women in Parliament.

The Prime Minister said it was a special occasion, for the Constitution has been fulfilled in terms of Members of Samoa’s Legislative Assembly.

Fiame acknowledged that Aliimalemanu Alofa was not new to Parliament, and that in the last sitting, the accountant by profession had chaired the Parliamentary Finance Committee. The Prime Minister welcomed Faagasealii and Toomata and said although they were first-time MPs, they would undoubtedly make valuable contributions in Parliament.

Outside Parliament the three MP’s were inundated with congratulatory ulas and well-wishes from other MPs, and members of the public who were allowed to enter Parliament for the first time since the lockdowns.

Outside Parliament the newly sworn-in women MPs praised God, and expressed their gratitude to their constituencies, and thanked their families and supporters. “Today’s achievement is for all women of Samoa.”