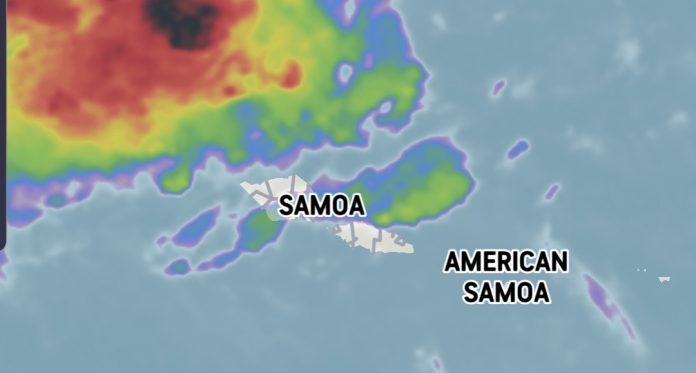 A convergence zone analyzed to the North of the islands associated with cloud and rain as well as gusty winds. This system is expected to extend over Samoa later tonight scattered rain and gusty periods. Brief heavy falls is expected at times; therefore, the Heavy Rain Advisory is now in force for all of the group.

The intense high pressure system centered Northeast of New Zealand continues to direct fresh and strong Southeast winds over the island and it’s coastal to open waters. Latest observations indicate strong Southeast winds of 45-55 kph affecting the island. Wave and swell activities affecting the island’s coastal to open waters, ranges around 3.5-4 metres and more. As the aforementioned high pressure system continues to move further eastward, winds and wave will diminish later tomorrow. All advisories
mentioned above remains in effect for the country.

Potential Impacts:
Strong southeast winds at times. Strong and pull out currents as well as rough seas and coastal inundation to specified locations.

(The next severe weather information will be issued at 5:00 am Thursday 16th July 2020)