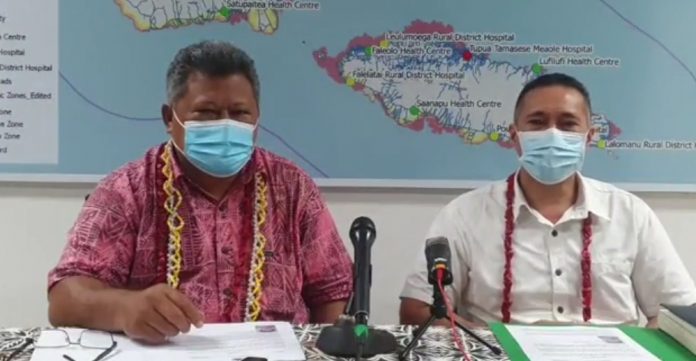 The Director General of Health has called for the public to come forward if they had been in contact with a seasonal worker who escaped a quarantine site at Moamoa and went to Western Union on Wednesday morning. Except to say he left the site at Moamoa, very few contact tracing details of the man’s movements were made known.

Leausa says the young man (alii talavou) whose name or photo image has not yet been released by the Ministry of Health, moved around freely until he was spotted in line at the Western Union branch on the ground floor of the DBS building in Apia, just before 9am Wednesday morning.

“The escapee was caught on video surveillance standing in line at Western Union just before 9am Wednesday morning..

“Everyone at the Western Union should all be quarantined as they have been exposed to the man that escaped from the quarantine site,” said Leausa at a press conference held at 6:30pm on Wednesday evening.

“All those people who had any interaction with the young man, they must come in,” said Leausa who seemed to not know how the escapee arrived into Apia.

“People he may have met on the way, perhaps on a bus or a taxi, as he moved from the quarantine site at Moamoa”.

Leausa confirmed there are already 20 citizens identified and taken into isolation after the incident on Wednesday morning, most of them including a woman and her two children, had stood in the Western Union with the quarantine escapee.

“We were able to locate some of the people that were inside the Western Union via footage, and others have come forward at their own accord, without complaining or being angry with us,” said Leausa.

The Health Director did not issue a list of locations of interest or reveal a detailed timeline of the young man’s movements while he was exposed to the public.

The Director General of Health said the incident came as a surprise to the MOH.

He revealed the seasonal worker arrived from New Zealand on a repatriation flight on 14 October, 2021 and like all passengers, was supposed to be quarantined for three weeks, however, he was discovered missing on Wednesday morning.

“He was part of the Recognised Seasonal Employer scheme returning home after his contract in New Zealand,” says Leausa.

“We were informed that a man escaped from one of the quarantine sites last night, however was recaptured this morning by NEOC,” Papalii told Samoa Global News.

The Health Director gave his assurance that Samoa was safe.

“I want to clarify to members of the public that, to date, we haven’t had a COVID-19 case, in Samoa over the last three or four months..

“We are safe,” said Leausa.

The Director General said public concerns are valid, as this flight left New Zealand last week, while they are still trying to control the spread of the Delta variant of the Coronavirus.

Passengers, however, have had multiple tests in line with Samoa’s existing protocols and Leausa made it clear the young man in question is fully vaccinated and has undergone three tests which have all been negative.

“The Delta variant symptoms can be visible up to 28 days, sometimes on the 8th day or the 10th day..

“All passengers on the flight that arrived on the 14th [October] were tested. The same testing was conducted in New Zealand three days before they left New Zealand,” assured the DG of Health.

“Tests were also conducted on the 18th of October and there was no virus detected, however as indicated earlier, the Delta symptoms can become visible after 28 days”.

He said it is concerning that the man in question, escaped quarantine within seven days.

He added the identity of the escapee would be revealed in a press release, however at press time of 11pm Wednesday 20th, no release was received.

On a separate matter, Leausa said Samoa was contacted by New Zealand authorities about a family that was quarantined at the Traditional hotel.

“A close contact family member has been tested positive, and due to precautionary measures the MOH had to act and isolate them to Motootua National hospital.”

Leausa said everyone in quarantine will be tested again on Friday.