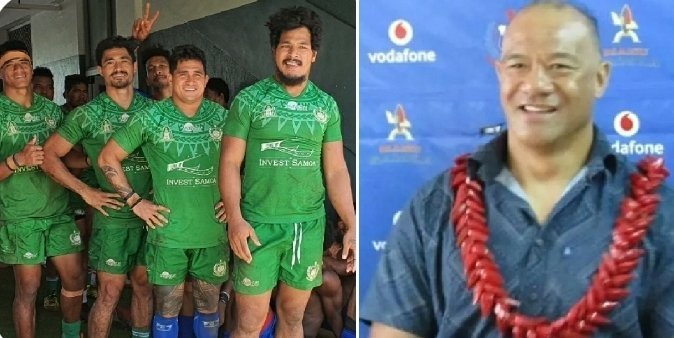 The Manu Samoa 7’s have completed their first week of trials after a two-day tournament where 48 of Samoa’s best young prospects were divided into four teams.

Head coach Muliagatele Brian Lima says he was pleased with the quality of matches and general performance of players, and to test consistency, they are expecting similar levels of performance next weekend.

“Overall, they performed very well. We saw some consistent performances from some of the boys for the two days, and that’s what we really wanted to test..”

Asked who stood out on this first round of trials, the Head Coach said, “Vaafauese was outstanding”.

Sevens rep Vaafauese Apelu Maliko of Tepatasi was the MVP who led his team to securing the Men’s National 7s Championship for Samoa in August last year.

Muliagatele and Assistant Coach Tausa Faamaoni Lalomilo said the format was for a two-day trial, with each team having to play 3 matches a day, or 6 matches over 2 days, just like the format for a typical HSBC World Sevens Circuit.

“The good thing about the 2 day trial is how much it tests the players’ performance when they’re under fatigue, especially on the second day, and we saw a lot of that today..”

“We wanted to mimic the format of the World Rugby 7’s circuit of having to play a 2-day tournament with a maximum of 6 games to make the finals, so players can get used to the way international tournaments will be played..”

Samoa’s Head Coach says he and his management will be looking with interest to next week’s performance for players who can maintain the mental toughness, quickly recover and then do it all again, within 6 days.

The repeat of the whole process next week is also in line with the HSBC World Series, where tournaments are held over 2 consecutive weekends.

“If you look back over the last 4 years, Samoa 7’s does not have a good record for the second week of tournaments, the performance always goes down on that second week,” said Muliagatele.

“We will be selecting a squad of 24 after these trials, and this way, we can select players on consistency over two tournaments, rather than just one or two good games,” says the National Sevens Coach.

The four trial teams were a mix of Samoa Sevens veterans, and developing young talent. 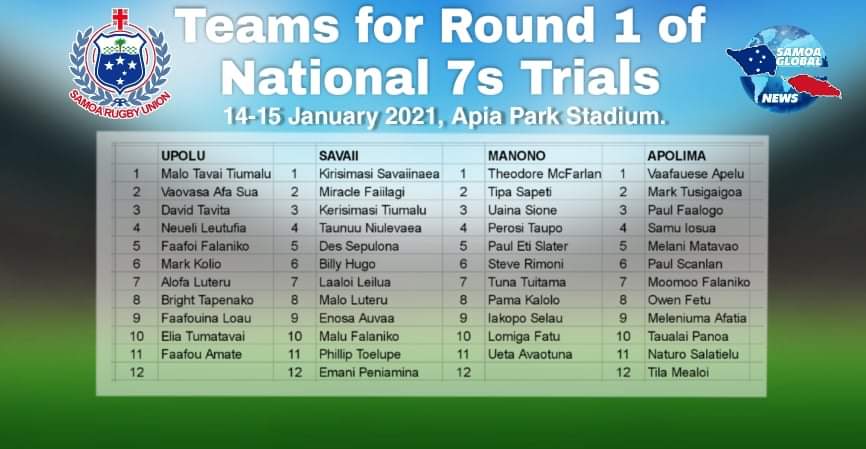 Apolima had the most experienced players on paper with Tila Mealoi seen organising the team on-field. His job made easier with familiar names like Melani Matavao, Vaafauese Apelu, Paul Scanlan and Samu Iosua on his side, as well as up-and-coming youngsters in Moomoo Falaniko and Mark Tusigaigoa.

Manono had the likes of Tipa Sapeti, Steve Rimoni, Tuna Tuitama and the experience of Paul Eti Slater.  Samoa’s double international for rugby and basketball Theodore McFarland looked fatigued as did many players on Day 2.

David Tavita showed his leadership on the field organising a young and less experienced Upolu team, and securing high balls off kick-offs despite his height. Upolu is not as strong on paper as the other teams with Gordon Langkilde and Laihona Vaegaau being “no-shows” who were listed for Upolu. Still, youngsters in Upolu such as Malo Tiumalu and Bright Tapenako showed courage against more experienced players.

Some veteran players named in Seilala Maposua’s Lakapi Samoa 15s Dream Team such as Gordon Langkilde, Joe Perez and Elisepeta Alofipo have not returned to 7s trainings, however, the last 2 days of trial matches has shown that Samoa’s developing pool of talent has the depth to replace outgoing players.

All four trial teams have youngsters putting up their hands and keen to pull on the blue jersey for Samoa.

Bright Tapenako, Phillipe Toelupe and Samoa National 7’s Player of the Tournament Steve Rimoni are all up for selection, and all of them still under 20 years of age. And there are many more players between agea 21-23, vying for spots.

Lima says the next 48 hours are crucial and  encourages all players to be smart about recovery to ensure they are able to perform at peak levels next week. He says recovery has to be effectively done in the next two days, before trainings start again on Monday.

“The players need to be on full rest, drink lots of water and eat healthy food for the next 48 hours,” advises Muliagatele.