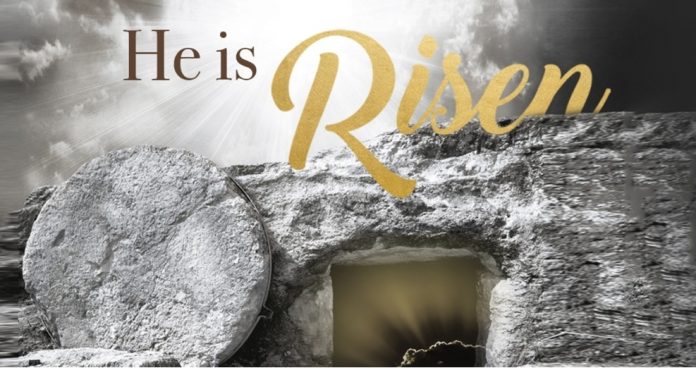 Source: TBN
“And he saith unto them, Be not afraid: Ye seek Jesus of Nazareth, which was crucified: he is arisen; he is not here: behold the place where they laid him.” Mark16:6 KJV

When Christ rose from the grave, there were many witnesses to His empty tomb and resurrected body. Mark 16 paints a picture of three women bringing spices to Jesus’s tomb to anoint His body with. But, once there, they were greeted by an angel of the Lord who revealed to them that Jesus had risen! The women were scared out of their wits! Though Jesus prophesied His own resurrection (John 2:18-22), people were still in shock. How could Jesus, who had been publicly crucified, be risen from the dead? What’s interesting is that the women ran away in fear instead of telling Jesus’ disciples and Peter of the Risen King as the angel of the Lord had asked (Mark 16: 7-8). They let their fear get in the way of their testimony.

Many times, we’re no different from these three women. We let our fears get in the way of our testimonies. We become emotionally paralyzed by the unknown. Proverbs 3:5 tells us to trust in the Lord with all our heart and lean not on our own understanding. Yet, more often than not, we lean on our own understanding instead of trusting in the Lord with our entire heart. What are areas in your life that you need to trust God in? Is it your family, your finances, or even your faith? Give the burden you’re carrying to God and let Him carry it for you.

In Mark 16:9-11, Jesus appears in His resurrected form first to Mary Magdalene. There is tremendous cultural and social significance for Christ to choose to appear to a woman first.  It shows that He isn’t afraid to break social barriers when reaching out to people and we shouldn’t be either! As a result, Mary Magdalene was the first person ever to share her personal testimony of the Risen King (Mark 16:10). But even upon hearing her testimony, Jesus’s disciples – those that had spent the most time with Him and had known that He would be resurrected – didn’t believe her (v.11). Has there ever been a time when you were turned away because of your testimony? You’re not alone! Your testimony is the most powerful story you have because it was written specifically by God for you.

It’s also encouraging to know that Jesus is forgiving and gives second chances. Even though His disciples didn’t believe Mary Magdalene that Christ had resurrected, He didn’t give up on them! He reached out to them again and in different ways so that they understood. Our God is a God of creativity! Once His disciples realized that yes, Jesus is alive, God continued to have tremendous plans for them! They became the leaders of the early church which set the foundation for body of Christ as it is today. We’re given their stories to understand more of who Christ is and so that we can learn from their experiences and grow spiritually. Thank the Lord that Jesus didn’t give up on His disciples after Mary Magdalene’s testimony fell on deaf ears!

Earlier during His ministry, Jesus gave two commandments and they are to love God and love people (Matthew 22:37-39). The single-most loving thing that we can do for people is share the Gospel with them. In Mark 16:15-16 after rebuking His disciples for their unbelief, Jesus issues His Great Commission to them: Go. Go into all the world and preach the Gospel to all nations. It’s the same for us today. We need to GO. Going into the world starts with going into our neighborhoods. God will intentionally put us in situations where we need to talk to people. Whether it’s the cashier at the grocery store or your child’s teacher, your mechanic, your coworker, or even your family members – He gives us opportunities to share His love with people every day.

As we celebrate Easter with our loved ones and share with others what He has done, let’s rejoice in the name of Jesus! The cross couldn’t hold Him and death had no power over Him! Through this, He has freed us from death and has called us into life eternal. The battle is won. Jesus lives!  Happy Resurrection Day, everyone!

Source: TBN has many resources available with videos on demand, shows, social media channels, partner networks around the globe in various languages. TBN’s Prayer Partners would love to pray for you as you embark on your Great Commission journey.

God Has Given Us Different Gifts for Doing Certain Things Well

God will Deliver You from All Your Troubles

When there is no Wood the Fire Goes Out