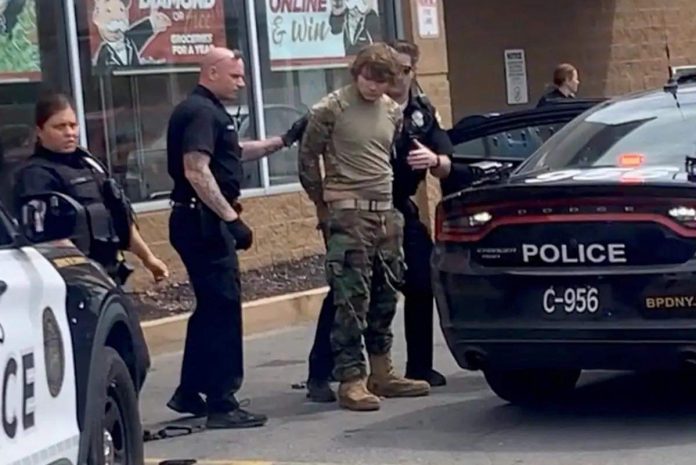 A young gunman dressed in military grade tactical gear opened fire at a supermarket in Buffalo, New York in what has been described by police as a racially motivated mass shooting that killed 10 people and wounded three others.

The gunman was identified as 18-year-old Payton Gendron of Conklin, a community about 200 miles (320km) south-east of Buffalo in New York state. He drove for hours until he arrived and entered a supermarket in a quiet neighborhood in Buffalo.

The entire horrifying event was live streamed via a camera affixed to the attacker’s helmet.

“He exited his vehicle. He was very heavily armed. He had tactical gear. He had a tactical helmet on. He had a camera and he was livestreaming what he was doing,” the city police commissioner, Joseph Gramaglia, said at a news conference afterward.

Inside the store, a security guard who was a retired Buffalo police officer fired shots at the gunman and struck him, but the bullet hit the gunman’s bulletproof vest and had no effect.

The Commissioner said the gunman then killed the security guard.

“This event was committed by a sick, demented individual who was fuelled [by a] daily diet of hate,” she said.

The shooting has stunned the local community. One of those attending a vigil on Sunday told Reuters: “It just hurts, why somebody would do that.”

Of the 13 people shot, police said 11 were black. Among those reported killed were a man buying cupcakes for his son’s birthday and an elderly woman who had gone shopping after visiting her husband in a nursing home.

“At that point the suspect put the gun to his own neck. Buffalo police personnel – two patrol officers – talked the suspect into dropping the gun. He dropped the gun, took off some of his tactical gear, and surrendered,” he said.

Buffalo’s Mayor, Byron Brown, said: “This is the worst nightmare that any community can face, and we are hurting and we are seething right now. The depth of pain that families are feeling and that all of us are feeling right now cannot even be explained.”

Mayor Brown said the gunman was not from their community. “This is a community where everyone loves each other..”

“This individual came here with the express purpose of taking as many Black lives as he could,” added Mayor Brown.

The Erie county sheriff, John Garcia, added: “This was pure evil. It was a straight up racially motivated hate crime from somebody outside of our community, outside of the city of good neighbours … coming into our community and trying to inflict that evil upon us.”

The video showed the gunman, dressed in military gear, pulling up to the front of the store with a rifle on the front seat, and then pointing the rifle at people in the parking lot as he exited the vehicle, and opening fire.

18 year old Gendron had been armed with a semi-automatic rifle, a hunting rifle and a shotgun, which were all purchased legally.

Buffalo’s African American community was on edge on Saturday night. “It’s sadness mixed with anger,” said a man who offered his name as Big John, “because he came all the way from Binghamton that’s like 200 miles away, to do this”.

Many said they were unsurprised that police had arrested, and not shot, the white 18-year-old suspect. “If he was Black he would have been shot,” said one man, who gave his name as Alias John. “They wouldn’t have given him a chance to surrender. They’d have shot him up.”

As the night drew on, some who spoke to reporters said they had witnessed the incident itself.

“I heard the pop pop pop and saw three people down,” said Grady Lewis. “I thought they were shooting a movie.” Lewis said he saw Gendron enter the supermarket, where the shooting continued. When he came out, he removed his tactical gear and calmly surrendered to police.

“I do know that this isn’t the first time this has happened in America, so this will be pretty much the same,” said Lewis. “There will be candles, probably have a march, some preaching. But nothing that needs to be done is going to be done.”

US president, Joe Biden, issued a statement late on Saturday. “The first lady and I are praying for the victims and their families, and hearts all across this country are with the people of Buffalo,” he said.

“We still need to learn more about the motivation for today’s shooting as law enforcement does its work, but we don’t need anything else to state a clear moral truth: a racially motivated hate crime is abhorrent to the very fabric of this nation,” he added.

“We must do everything in our power to end hate-fuelled domestic terrorism.”