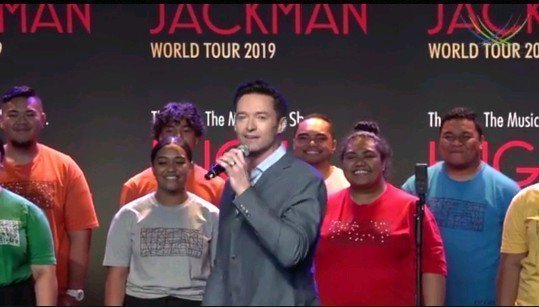 Jackman chose to announce his World Tour from the university after watching a cover of the Greatest Showman sung by AUT’s UNIPREP student group, which was arranged by Walter Fraser and Tuilagi Igelese Ete.

Hugh Jackman spoke of how impressed he wss with the AUT student cover, “Ever since The Greatest Showman, I have received, and I’m not kidding, 5 videos a day from schools, from Universities, from karaoke bars, from weddings, from births! you name it..of people singing their versions of the songs.

“And many of them have touched my heart and mean a lot to me, but I’ve got to say that none more than the video that I saw of these incredible kids at the Auckland University of Technology.

“And when it came time for us to actually launch this tour, I said, there’s one place for us to go.”

The students were conducted at the tour announcement by renowned Samoan composer Tuilagi Igelese Ete who also had a hand in creating the video that Jackman had seen.

Tuilagi who is completing his PhD at AUT also has a role at the university to work with students, using music as a medium to inspire youth to achieve, especially Pasefika and Maori students.

“It was the brainchild of Walter Fraser – the Director of Pasifika Advancement at AUT – all his hard work and passion,” Tuilagi tells Samoa Global News.

“I suggested the song to Walter because it’s such an inspirational powerful piece, the lyrics and music really empowers our youth.

“It was Walter’s idea to shoot the clip which then went viral, and that’s the power of what these guys can do.”

Tuilagi says the students only found out about Jackman’s visit on the same day and had no time to pre prepare what we see in the tour announcement video.

“The kids only got told today! I wish we could have told them like 2 weeks ago.”

Nathan Ashin says Jackman brought a lot of passion to the floor and made it more meaningful to have sung with the creator of the Greatest Showman and adds, “Oh and Hugh Jackman can you make me one of the 50 people that you take wirh you?”

“Oh and me too count me in,” says Chamani Lavea

Part Maori actress/singer Keala Settle who played bearded lady Lettie Lutz in the award winning musical traveled to New Zealand with Jackman and will also be taking part in the tour.

Settle whose Mom is Maori was emotional at the announcement and paid tribute to the Maori people.

“Maori people, the indigenous people are close with their ancestors and you can feel them..And that’s exactly what happened when I landed.”

“Actually when I broke through the clouds and I started seeing Aotearoa it was massive, it was my Mom with me the whole time.”

It took one viral video of these AUT students to grab the attention of a worldwide audience. Today, they prepared themselves as Hugh Jackman and Keala Settle came knocking on the doors of the AUT South Campus.