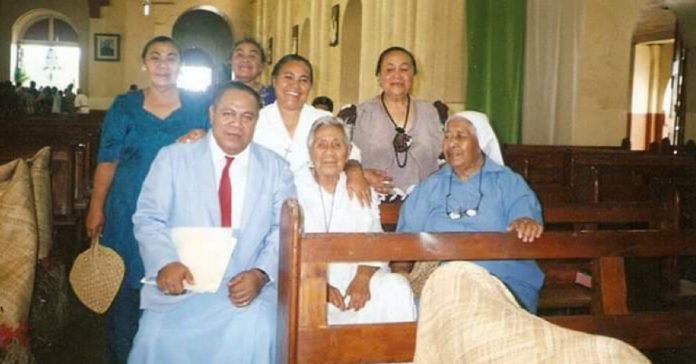 This picture came up as a facebook memory a few days ago.

In it is my dad’s late brother Uncle Au’uapa’au Tominiko (the musician/comedian), my dad’s sisters- Aunty Losa (ever Ms Elegant in green), Aunty Silia (peek-a-boo from the back), our late Aunty Sister Malia (the one who smiles like me, teeth and all) and Aunty Telesia (in brown with beads like a true Beyonce). There is another Sister there in blue, but I can’t recall her name. #Sorry

In the centre of the picture is my late Grandmother, Liua Tuala Taputù Taouma-Mulipola, the Boss Lady/Matriarch of my Dad’s family.

As far as Bosses go, she, like most Samoan Mamas, was the real, REAAAAL Boss. Lol.

When that woman spoke, she spoke with authority.

She was direct, firm and never minced her words.

You knew when she was happy and unhappy with you because she would tell you straight to your face.

When you spoke to her, you could feel her stare, that look as she assessed every word that came out of your mouth.

She was afraid of nobody and nothing.

She was intimidating and scary at times.

The only thing more frightening than my late Grandma, was her set of Church Rules because she was absolutely devoted to her Church.

My Grandma was born and raised a Catholic.

She was and still is the most Catholic-eeest person I have ever known.

It got me thinking…I know a lot of us grew up with Grandmothers or Grandfathers deeply rooted in their faith.

I’m sure you have your own traditions and practices passed down from them to your parents, and then onto you.

Here are some of the Church practices my Grandma Liua brought us through. A set of Church Rules that HAD to be kept, unless you were really stupid or no longer wished to live:

1) If you have knees that work, kneel.
Only three kinds of people don’t kneel in church: people in wheelchairs, people with walking sticks and people with no knees.

Everyone else regardless of your post or status, kneel.

2) If your family goes to Mass every morning of the week and you miss a morning because you went somewhere the night before – goodlaaaark!
You are disowned for at least a week.

Don’t miss Mass. You get up and pull yourself together, ignore your hangover and drag your @$$ along to Mass the next morning!

Whose child are you?

3) Observe and respect the silence.
I’ve been to a few different denomination services and none of them are quite as silent and solemn as a Catholic one.
If you have a toddler that runs around, please stay outside.

Better yet, please stay home until your child is old enough to understand the killer glare that silently says,
“You will sit down RIGHT now and be VERY QUIET or so help me I will give you the biggest hiding of your life after church!”
Many Samoan kids grow up understanding exactly what the killer glare means.

In church, you listen and reflect (and breathe, ONLY because you need to breathe).
Do not sneeze, do not cough, do not even blink.
#Shhhhhhhhh

You are Dead now? Okay…you’re excused. CALL THE PRIEST!
#Priorities

5) You learn the responses to everything.
Whatever prayer is being said, you recite it, or you respond.
If Grandma Liua doesn’t hear your voice, or see that you’re not responding or that you are asleep while in church or faigalotu, you’re as good as gone.

Here lies Amelia.
Beaten with her grandmother’s walking stick. Because she fell asleep during prayer.
#Speak

6) Never ever question the Church, teachings or anything related to the Church.
Nowadays, we can get away with asking things like “But why do we HAVE to wear white?
If my Grandma was alive, I wouldn’t even THINK the question.
The Church is ALWAYS right.

If my Grandma was here and knew half my thoughts about certain things Catholic, I would be on her disown for a month list
#DontYouEver!

7) KNOW your prayers.
Up to this day, I do not know the Act of Contrition by heart.

I gave up trying to memorize them years ago.

I’m thankful that God still listens to my prayers.

Litanies, Stations of the Cross and just about every single prayer known to the Catholic church, they can recite.
Meanwhile….Generation You-Know-Nufing-Jon-Snow are still struggling through the basics of the prayerbooks.

I also try not to enter an argument about why we respect the Holy Mother the way we do. Not bow to, RESPECT.
I know to the depths of my soul that Mary is My Mother, Our Mother, the Mother of Salvation. But ask me to explain why.. and I would say – JUST BECAUSE.

Ask Grandma Liua or our elders and they would launch into a two hour explanation of the WHYs and the THEREFOREs.

Don’t ever disrespect Mother Mary to a born, raised and living Catholic.

9) We must fast before Mass.
Our household never had breakfast on Sunday mornings or an hour before any Mass we attended.
My Grandma said this was a form of purifying (?) and preparing yourself for receiving the body and blood of Christ.
What did that mean for us?
That means, you eat everything and anything you can, on Saturday night – to get you through to 12pm Sunday toonai.
Because until then, you can starve child.
#UaNoSorry

10) Lent, my favourite-eest time of the year where Catholics fast, do penance and abstain from their usual luxuries.
I have never been able to give anything up except meat on Ash Wednesday and every Friday of Lent.
Older Catholics are champions of this.
My Grandma was a heavy tapa’a Samoa smoker but always had the discipline to give that up for Lent.
People who drink alcohol would stop.
Some would give up meat for the whole season.
I am still inspired by Grandma so I’m going to try my best next year and I know exactly what I am going to give up.
I am going to give up Atapana.
I might start a bit early though. Like, today.
#BoyBye

11) Confession.
When you’re supposed to tell another person every. single. sin. you have committed since your last confession, in order to get your penance and receive absolution.
It usually takes me 3 to 4 years to work up the courage to confess my sins.
I would much rather prefer to confess my sins to someone I would never, ever, ever, ever, ever see again in this lifetime or the next – but the chances of that are veryyyyy small so you just have to get with it and pray that the Priest either gets transferred to Africa the following week….or they get amnesia overnight.
Otherwise, please put me in a container and ship me off to Madagascar.
Older people have no problem with confession.
They will get confession today, next week, the week after and every chance they get.
While it takes the young a few minutes to make their way up, elders almost race to see who gets to confess first.
Maybe they don’t sin as much as we do?

12) No food or drinks in Church.
If your child is hungry or thirsty, they can wait.
An hour and a half won’t kill them and what doesn’t kill them makes them stronger anyways so BOOM!
#Discipline

13) Phones in church are a big no-no.
You shouldn’t be taking phones at ALL into church.
Should your phone RING or BEEP in church and you’re with an elder, Godspeed my friend.
The congregation’s looks will kill you if your elder’s fist doesn’t. Leave phones at home.

15) If you’re not on time, don’t bother going.
Old people are usually the first to be seated in church.
We live a minute (by foot) from church.
If Mass starts at 8.30am, my Dad would bd there by 7.45am.
I can’t do that.
For me, if Mass starts at 8.30am, I am there by 8.25am.
Two minutes to say my prayer when I enter, three minutes of quiet reflection, then please proceed – Amelia is ready.
#TimeManagement

16) They KNOW what you did in church.

You could be sitting five rows behind or off to the side, but Grandma Luia had the telepathic xray vision to be able to see every single movement, and hear every giggle, and every whispered word from 20 meters away.
I swear these old folks have security cameras everywhere.

Did you grow up with your Grandparents and were they like this too?

Or was it just me and my cousins? LOL.

Marlene Kathleen Mulipola
Marlene Mulipola is the Manager for New Extension at Samoa Stationery and Books. Educated at St Mary's College and the National University of Samoa, Lene writes as a hobby.