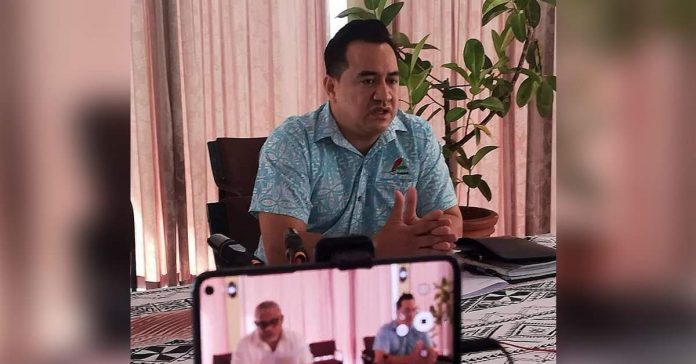 Chief Executive Officer of the Ministry of Finance (MOF) Leasiosio Oscar Malielegaoi has said resorting to external debts to bail out the country will be Samoa’s last resort, should prolonged lockdowns due to COVID-19 continue to impose drastic effects on the local economy and residents’ livelihoods,

The MOF CEO told Savali News that at this point in time, considering additional new external loans as a result of COVID 19 is not on the table and will be Samoa’s “last resort”.

For the COVID 19 response, Leasiosio says that the Government’s initial response of $66 plus million tala will be complemented by a second Stimulus Package to be introduced to Parliament alongside the new fiscal year 2020-2021 Budget estimates in May.

The CEO was not at liberty to reveal details of the second Stimulus Package until it is tabled before Parliament.

Leasiosio acknowledged that Samoa like the rest of the world is experiencing the “harsh reality of COVID-19 and its impact“ and says MOF is constantly liaising with international stakeholders such as the IMF and World Bank.

He added that to ensure Government can respond to the needs of the country should COVID-19 escalate, MOF’s strategy is to anticipate the worst case scenario.

“On the heels of the measles epidemic from which the country is still in recovery mode, Samoa was again confronted by the Coronavirus pandemic,” he continued.

“And contrary to views questioning the Government’s first $66.3 million tala Stimulus Package now providing immediate and essential relief for our people, we have to plan ahead.”

Samoa’s outstanding external debts as at 31 December 2019 stands at $1,028.5 million tala according to the latest Economic Report issued by the Central Bank of Samoa.

Samoa’s annual Debt Servicing Repayment as at the end of December 2019 totalled $71.43 million, which was 0.4 percent lower than the previous year which was $71.70 million tala.

“This was equivalent to • 10.63 percent of recurrent revenue, • 14.70 percent of foreign reserves, or • 8.54 percent of total exports of goods and services,” clarified the Economic Report.

“What this means is that for every tala that is earned by Government (Recurrent) Revenue, approximately 11 sene is used to pay off Samoa’s foreign debt,” clarified the Central Bank.

“For every tala that is saved as the country’s foreign reserves, 15 sene is used to pay for our external debt,” the report continued.

“For every tala that we earn from the export of our goods (export earnings from fish, taro, nonu juice etc…) and services (mainly tourism earnings), we use around 8 sene of those earnings to repay our foreign loans”.

Leasiosio adds that 11% of Government’s Revenues are dedicated to External Debt Service which means 89% is utilised by Government to meet its financial obligations such as funding major infrastructural projects and maintaining public services in health and other essential services.

In view of those figures, the Chief Executive Officer for the Ministry of Finance concludes that the External Debt is manageable and speaks volumes to Government’s financial stability.