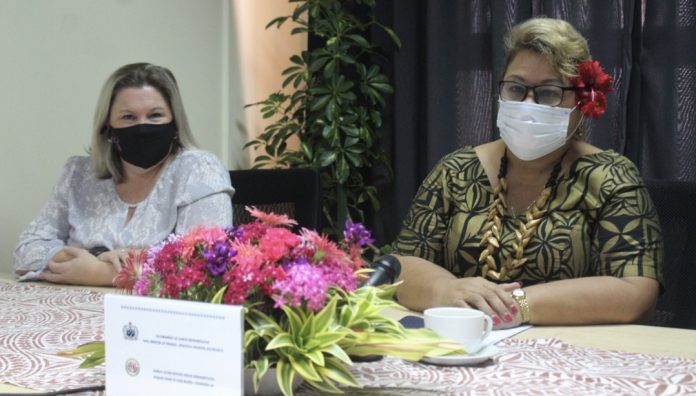 The Government of Samoa has signed a $500,000 tala partnership agreement  with the Samoa Victim Support Group that will for the first time,  provide core funding to the NGO’s efforts to help and house victims of domestic violence and abuse.

“Today is an auspicious day marking the first ever direct assistance by the Government of Samoa to the SVSG in support of its ongoing efforts and programs in the fight to eliminate violence against women and girls,” said the Minister of Finance in her address. “A cause that not only continues to remain at the forefront of global issues but also prevalent in our society today”.

Hon Mulipola Anarosa Ale welcomed the Chairman of the Board of SVSG, Afioga Georgina Lui and members of the organization to a signing ceremony held at the Minister’s offices to mark the occasion.

“For years the Government has supported various programs and efforts through our Ministry of Women, Community and Social Development to eliminate violence against women and girls but today, it partners with the SVSG in this significant battle in ensuring a safe and secure future for our children,” said Mulipola.

The Minister highlighted the prevalence of gender based violence in Samoa where women continue to report being in intimate partner relationships where they have experienced some form of abuse by their partner including physical, sexual and emotional abuse.

The National Inquiry into Family Violence conducted by Samoa’s National Human Rights Institute (NHRI) reports 86% of women surveyed reporting to have been physically or verbally abused by their partners.

“This figure is concerning and the Government therefore acknowledges the significant contribution that the SVSG have made to this fight over the course of the past two decades,” said the Minister.

The funding to be disbursed following the signing of today’s Funding Agreement will support current efforts of the SVSG that include:

a. Counselling for victims and offenders;

b. Advocacy programs within the communities and across the country to reduce the incidence of abuse;

c. Support for food and medical supplies at all SVSG shelters;

d. Support to raise economic conditions of families of victims of abuse to address welfare that include the Nofotane Program and others;

g. Administration assistance to the SVSG to support the implementation of the stated efforts.

The partnership between the Government and SVSG supports the vision of the Pathway for the Development of Samoa 2021/22 – 2025/26 of “Fostering Social Harmony, Safety and Freedom for all”.

The assistance will address both directly and indirectly the Key Strategic Outcome 1 of Improved Social Development with specific focus on the protection and well-being of children, women, survivors of domestic violence and those considered as most vulnerable.

The Minister acknowledged the many years of SVSG’s assistance in the community, to fill a gap that existed in the provision of social services to the people of Samoa especially the most vulnerable.

“I take the opportunity on behalf of the Government of Samoa to thank the SVSG for agreeing to this collaboration. We have no doubt SVSG will continue to improve its organization to deliver results as expected”.

“I thank you for the years  hard work, commitment and dedication taken by the President, the Board, Management and all the employees of the SVSG and their volunteers and associates”.

The Minister also acknowledged and thanked Samoa’s development partners who have assisted Samoa’s fight to end violence against women and children.