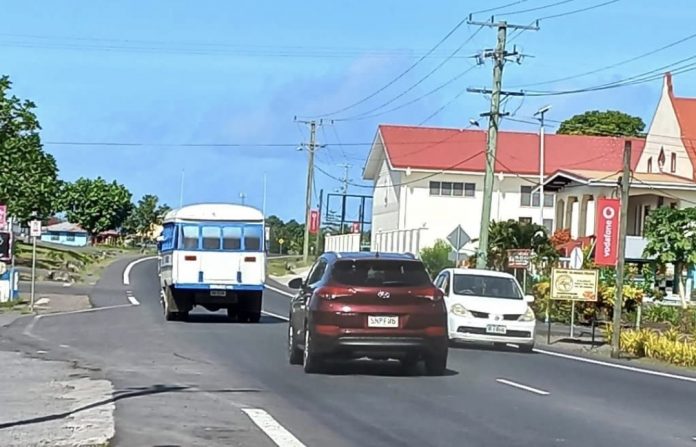 Thursday 7 April 2022, Apia Samoa.  The opening hours of 6am to 2pm announced on Monday by the government remains, however, cannot be realistically applied because roads are closed to all vehicles by 2pm. This was confirmed by amended State of Emergency Order 76 issued today, the second order issued in two days.

State of Emergency Order No 75 issued on Tuesday afternoon has today been replaced by SOE Order 76, accompanied by a public notice to reinforce government’s position that vehicles are prohibited on the roads after 2pm, while at the same time, stating that permitted opening hours remain from 6am to 2pm.

The SOE Order 76 makes an amendment to Section 5(2)(c) which yesterday had stated, “Private vehicles are permitted on the road and must comply with conditions in Order 5(1)(d) to (g)”. Sections d to g are requirements to show a vaccination card, observe social distancing, wear a face mask, and ensure no children are traveling unless they’re on route to be vaccinated..

Under SOE 76 issued today the same Section 5)2)(c) now reads, “Private vehicles are permitted on the roads from 6am to 2pm and must comply with conditions in Order 5(1)(d) to (g)”.

It is still legal for businesses to open until 2pm under SOE No.76. The accompanying Public Notice also confirms opening hours are from Monday to Saturday between 6am to 2pm, however, there is now a clarification that, “ALL business and workplaces must make necessary arrangements to close at a suitable time to allow transport arrangements for employees to go home within the permitted hours”.

Asked for a comment Samoa Chamber of Commerce and Industry President, Seulupe Michelle McDonald said it is unfortunate that this was not clarified in the beginning, however, “we are still thankful for the consideration for businesses to continue to operate under Alert Level 2, despite this being a reduction in working hours to accommodate for travelling times.”

Seulupe added that until a further amendment is made, the business sector will follow the rules under SOE Order 76 and close early, to ensure staff are home on time.

Today, on day two of Level 2, vehicles were seen on the road way past 2pm. Vehicles, taxis and buses were all on the road at 3pm. Many of the police blocks were not set up either.

When asked, a police officer told SGN that for him, they have to consider that people have just finished work, and they have to apply common sense and cultural respect (ava fatafata), because the public are not going anywhere or doing anything to spread covid, but simply travelling home.

The only thing that will result in this, he said, is cars speeding home, which not safe for the public. “Na o le ave saoasaoa le mea le maua.”

Clarification of Lockdown Conditions of the current State of Emergency Orders

2. Permitted activities during lockdown:
a. Public gatherings and almost all businesses (except Nightclubs, Bars, Fitness Centres and Gaming facilities) are allowed to operate Monday – Saturday, between the hours of 6am – 2pm (“Permitted Hours”)

ALL businesses and work places must make necessary arrangements to close at a suitable time to allow transport arrangements for employees to go home within the permitted hours.

c. Children under 12 years old are prohibited from any public places, including public transport, except for when they are being taken to get their vaccinations.

d. Church services are permitted between the hours of 6am – 2pm for no more than 30 people at any service.

e. No businesses or public gatherings are permitted on Sundays, except for Church services.

3. Public roads:
a. Vehicles and people (except children under 12 years old) are only allowed on public roads between the hours of 6am and 2pm.

b. On Sunday, vehicles and people are permitted on the roads for the purposes of attending church.

c. Only authorised vehicles and authorised personnel are allowed on public roads outside the permitted hours.

d. The Samoa Police Service will be conducting roadblocks outside of the permitted hours.

Please refer to the latest State of Emergency Orders published by NEOC for more details.