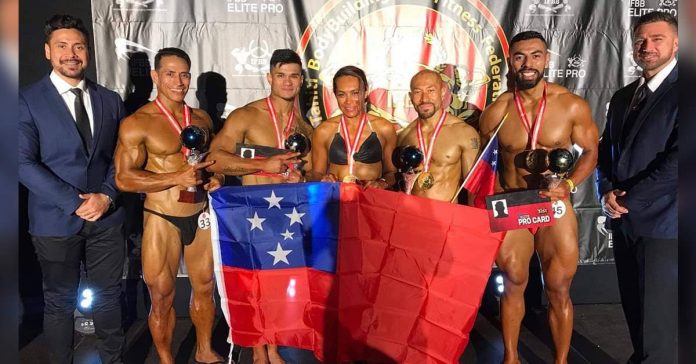 8th October 2019 Tahiti.  It was a clean-sweep for Samoa’s Bodybuilding team, with all 5 athletes taking out gold in their respective divisions at the IFBB South Pacific Championships held in Tahiti last week.

Two Samoan bodybuilders have secured their pro-cards, earning them the right to compete as International Federation of Bodybuilding and Fitness (IFBB) Elite Professionals on the IFBB Pro-Tour.

Two-time and current Mr Samoa title-holder, John Lemoa and Arona Mataia won 2 out of the 3 pro-cards which were up for grabs at the recently completed IFBB South Pacific Oceania Championships in Tahiti.

The pair took out their respective divisions to be awarded Overall Champions for Men’s Bodybuilding and Men’s Physique.

As part of the pro-card offer, Lemoa and Mataia have 12-months to decide if they wish to turn professional.

After winning their divisions, all of Samoa’s male athletes were in contention for the title of ‘Overall Winner’ which was awarded to John Lemoa.

Bodybuilding Federation of Samoa (BBFS) President Magele Johannas Keil said that, “we are extremely proud of the team’s achievements, which once again reinforces Samoa’s position as the powerhouse of bodybuilding in the region”.

“We acknowledge the dedication and sacrifice made by our Athletes and also say thank you very much to our supporters and sponsors who made our participation possible” said Magele.