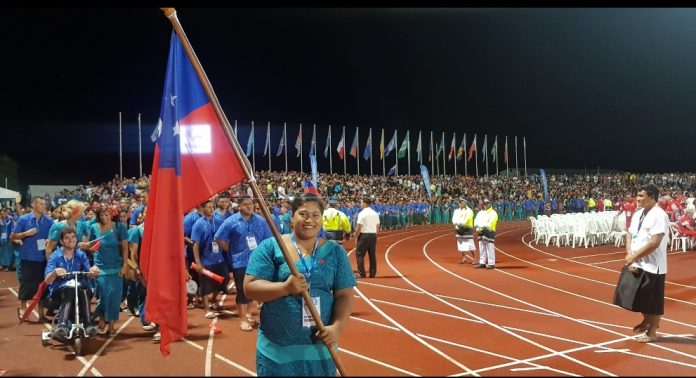 Born in Tuasivi 17 November 2000, the 18-year-old also from Sa’asa’ai and Fa’ala, Savaii won gold medals in the Arafura games, Commonwealth Gold Coast games and the Mini Games in Vanuatu.

At the Arafua Games in Darwin earlier this year, Feagaiga set new Oceania Junior and Senior records with her 115 kg snatch.

In selecting Ms Stowers, President of the Samoa Association of Sports and National Committee (SASNOC) Fepulea’i Patrick Fepulea’i said, “It is fitting for Ms. Stowers to carry the Samoan flag given her achievements in Weightlifting”.

President and Head Coach of the SWA Samoa Weightlifting Federation, Tuaopepe Asiata Jerry Wallwork told Samoa Global news that Ms. Stowers deserves the honour of carrying the flag of Samoa for this event.

“She deserves it, and I am happy that SASNOC had selected her to be the flag bearer for our team,” he said.

“She has done well in her weightlifting career winning gold medals for most of the tournaments she had participated in”.

Speaking to Samoa Global News, Ms. Stowers said it is a great honour to be carrying the Samoan flag during the event.

A survivor of abuse as a young girl who sought refuge with the Samoa Victim Support Group (SVSG), Feagaiga by her own admission says she was ‘shy and hopeless’ until she was given the opportuntiy by Tuaopepe Jerry Wallwork to take up weightlifting in 2016.

She told Samoa Global News, that sport was her second chance in life that helped to rebuild her confidence and reset her life after the ordeal she had gone through.

“Weightlifting gave me hope and life again, thanks to my coach Tuaopepe for believing in me and pushing me to be a better person,” she said.

“I found something that I am very passionate about and everytime I am competing people see me as me and not as a victim or survivor of sexual abuse;

“Everytime I am on the stage competing I know my country is behind me especially my Mama Lina;

“I am what I am now if it was not for the love of Mama Lina,” says Ms. Stowers referring with adoration to the President of SVSG Siliniu Lina Chang.

Samoa’s flag bearer added that she is ready for the Pacific Games and is aiming for nothing less than a gold medal.