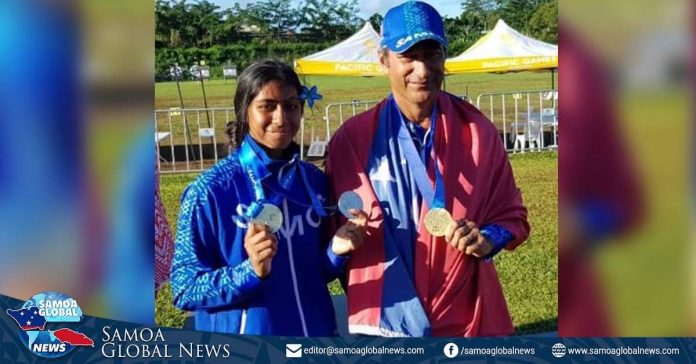 12 July 2019, Pacific Games Apia Samoa. Samoa’s first gold-medalist in the XVI Pacific Games has won two more medals in the final day of Archery with a Gold in the Mixed Doubles Recurve and a Silver medal in the Women’s individual Recurve.

Jil Grete Andrea Walter won Samoa’s first gold on her 18th  birthday on Monday. Today she teamed up with her father Muaausa Joseph Walter in the battle for Gold against arch rivals from Tonga.

The NUS student then also competed for Gold in the Women’s Individual Recurve contest, losing narrowly to New Caledonia to secure the Silver medal for Samoa.

Jil is the only girl in a family of four. She has two older brothers Edward and Joshua and one younger brother.

Speaking to Samoa Global News, Jils mom Sasae Walter confirmed that her name is JIL with one ‘l’ which stands for Jesus Is Lord.

“Jil, her name is actually Jesus is Lord. so we shorten it to Jil.”