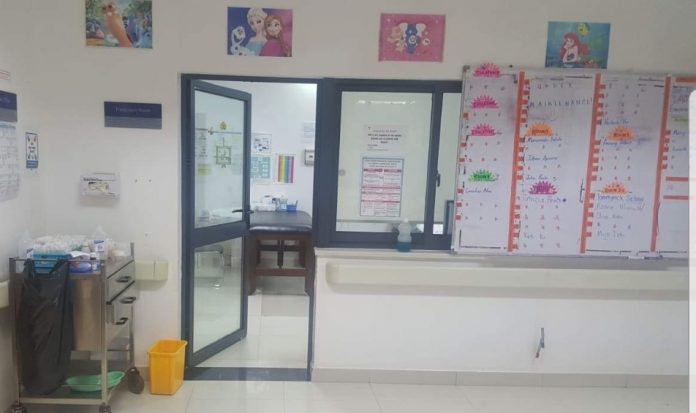 Penina Sapu may have lived with an undiagnosed complex heart condition all her life; because treatment was never sought until she collapsed at home on Sunday evening 3rd May 2020, and taken to Foalalo District Hospital.

The 11-year-old presented with shortness of breath, which according to her parents, she had been experiencing for several weeks prior to her collapse that day, especially after running and playing with her siblings.

Penina’s parents also told doctors that incidents of their daughter collapsing at home had started a little over a year ago. After incidents, however, she would seemingly return to normal quite quickly.

The recently allocated full time doctor at Foalalo District Hospital, Dr. Sione Tuionetoa referred Penina to the Malietoa Tanumafili II (TMTII) hospital at Tuasivi where an x-ray and bloodwork were carried out.

“An x-ray at Tuasivi showed an enlarged heart, so the patient was transferred by ambulance to Motootua on Wednesday 6th May for further tests and an echocardiogram”.

“She had a large right-sided heart with hypertrophy of both ventricles, while the left ventricle was smaller than the right”, said Dr Fatupaito.

Definition: “Hypertrophy is an increase and growth of muscle cells and muscular size achieved through exercise or the muscle being overworked”.

Definition: Hypertrophic cardiomyopathy (HCM) is a disease in which the heart muscle (myocardium) becomes abnormally thick (hypertrophied). The thickened heart muscle can make it harder for the heart to pump blood.

Dr Fatupaito said that in talking with Penina’s parents, the history of her condition dated back a year ago.

“The parents say they noticed increased work of breathing especially after walking and playing, but they related that to her overeating and increase weight, however, the fast breathing became noticeably more obvious over time”, said Dr Fatupaito.

“Her Dad said two young men on the mother’s side died suddenly of possibly a cardiac disease”, she added.

When asked, the Ministry of Health CEO confirmed that, “HCM is a condition where a portion of the heart becomes thickened without an obvious cause, but usually resulting from the heart overworking to pump blood to the rest of the body”.

“Symptoms include shortness of breath, fatigue and palpitations – where the patient can often feel their heart racing; and that is what Penina presented with,” said Leausa.

Dr Farah Fatupaito sought a second opinion from two Paediatric Cardiologist specialists from Auckland’s Starship Hospital. Nigel Wilson and Clare O’Donnell are no strangers to Samoa as they have been visiting Motootua National Hospital twice annually, for the past 15 years.

Leausa says it is usual practice to upload echos and send results of bloodwork to Starship specialists for a second opinion, whenever doctors at Motootua Hospital come across complex or rare cases.

“They are just a phone call or email away”, says the MOH CEO.

After sighting the video of the initial echo and a repeat one for follow-up angles, Dr Nigel Wilson writes in an email to confirm Dr Fatupaito’s diagnosis.

Dr O’Donell further shared, “I recall a teenager with a similar condition who passed away suddenly a few years back, a day or two after his admission to Starship. We were just about to talk to the family about how serious this was, when she went to the bathroom, collapsed, and could not be resuscitated”.

“I would get a good family history and how many children are there in Penina’s family, because there is genetic relevance here”.

Two nights after Penina was admitted to Motootua, on Friday 8th May 2020 – Senior Paediatric Registrar Dr Litara Esera had been on-call; a shift that ends 8am Saturday morning.

“Penina was experiencing severe shortness of breath, so we took her to the treatment room for an ECG which revealed SVT”, said Dr Esera.

She explains that Supraventricular tachycardia (SVT) is a condition where ones heart suddenly beats much faster than normal, and then it can then slow down abruptly.
“A normal heart is 80-120 beats per minute for an 11 year old girl. Penina’s heart rate was 160-190;
“I called Dr Fatupaito and ICU immediately, but at the same time, Penina started to crash,” said Dr Esera.
“Her oxygen saturation was dropping. She was pale, short of breath, agitated and started to panic, and did not want to be touched;
“But my concern was that her body was already in severe shock; her oxygen saturation was falling and her vital organs weren’t perfused – meaning they were not getting oxygen;
“She was crashing. So we followed the prescribed protocol for SVT”.
“We first tried the vagal manoeuvres, like raising her legs and trying to get her to blow on her thumb; but SVT was causing reduced output to her peripheries, and we were losing her;
“We needed to escalate SVT treatment to the next level, and that is to administer IV adenosine in an effort to revert her heart rate back to normal”.
“Once the IV of adenosine was administered, her heart rate dropped to below 100, and we then had to perform CPR. That brought Penina’s hear rate back to normal rythm”, said Dr. Esera.
She added that, “When Dr Fatupaito, Dr Tito and ICU arrived that morning, her heart rate was stable”.
Head of Motootua Hospital’s Paediatric Unit, Ulugia Dr Tito Kamu as well as the ICU on-call doctor agreed that Dr Esera had followed protocol and there was nothing they would have done differently.
When Dr Litara Esera left the hospital that Saturday, the senior doctors in charge and the on-call doctors for the day were all in attendance – awaiting Penina’s parents for the family discussion. During the night and the incident that morning, it was Penina’s aunt who had been on duty at the hospital. She told doctors Penina’s parents had been called and were making their way to the hospital.
Dr Litara Esera said she had documented the chart detailing the resuscitation, had discussions with and handed over to the senior doctors who had been dealing with Penina since her arrival at Motootua.
According to Dr Farah Fatupaito, when Penina’s parents arrived, they made a collective decision with ICU to not ventilate her on the basis of the condition of her heart, and for palliative care to commence.
Penina passed away that Saturday afternoon, with her parents and family by her side.
Leausa Dr Take Naseri expressed his sincere condolences to the Sapu family and says the Ministry of Health will be following up to ensure Penina’s siblings are brought in for screening.
“We want to screen all of the children in Penina’s mother’s family to make sure they don’t have similar undiagnosed cardiac conditions”.