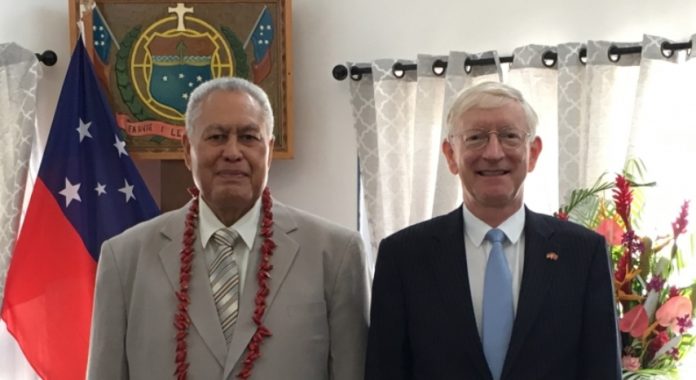 The Ambassador of the Federal Republic of Germany to Samoa, His Excellency, Mr Stefan Krawielicki presented his letter of credence to the Head of State, His Highness Tuimalealiifano Vaaletoa Sualauvi II to be accredited as the new German Ambassador to Samoa.

In a ceremony at the Head of State’s residence at Vaitele this morning Mr Krawielicki expressed his sympathy for the loss of lives in the tragic measles epidemic that recently affected Samoa.

His Excellency stated in his speech, that the relationship between Samoa and Germany in the early 1900s was furthered strengthened when two nations established diplomatic relations in 1972, a true sign of how strong two nations are connected historically, culturally and politically.

Climate change has been Germany’s top priority in the region which Samoa is one of the recipients of German Development Agency GIZ funded projects such as the Coping with Climate Change in the Pacific Island Region, Adapting to Climate Change and Sustainable Energy and the most recently launched Nationally Determined Contributions hub project in cooperation with SPREP.

The Ambassador said that it is the hope of his government to continue to enhance ties of cooperation and goodwill with the Government of Samoa in areas of national importance to both developments.

Receiving the German Ambassador, His Highness made special mention of Samoa’s long shared history with Germany which is proven in many Samoan families who have German roots. Most of them are well known to have contributed to the social and economic development of Samoa. Old German plantations are still visible despite redevelopments by residents. These aspects of our relationship are important as a record of history, appreciating the presence and steering our way forward. In attendance was Mrs Christa Szegedi, Honorary Consul of Germany to Samoa and also the owner of Treasure Box Jewels, that is well established in Apia.

The Head of State also expressed his gratitude to the German government, for their continuous support and assistance to various development sectors of Samoa including the environment and climate change. His Highness commended Germany’s GIZ financial support to regional projects for Climate Change that enhance our Blue Pacific strategic positions and collective action.

The Head of State congratulated His Excellency on his ambassadorial appointment and expressed his hope for more opportunities for development and people to people link between Samoa and Germany during his tenure. Mr Stefan was accompanied by his wife and the Programme Director of the GIZ Office in Suva, Mr James Macbeth. The Ambassador resides in Wellington.

Born in Luxembourg on 13 May 1956, Mr Krawielicki graduated from the University of Tubingen with a law degree in 1985. He is a lawyer by profession and has worked in Paris from 1985-1986. In 1987-1988 he entered the Federal Foreign Office in Bonn as an attaché and later in 1988-1990 he became a Desk Officer with the Legal Directorate-General responsible for foreign law and visa legislation. Mr Krawielicki was first posted as Legal and Consular Desk Officer, Protocol Division of the German Embassy, in Lisbon, Portugal in 1990-1993. He returned to Bonn after his post in 1993-1996, and worked at the Federal Foreign Office as a desk officer in the Personnel Division. He was called again in 1996-2000 to be posted at the German Embassy in Riyadh as the Head of the Economic Affairs Section. He returned to Germany in 2000-2001, and served at the Federal Foreign Office in Berlin as a desk officer for the Economic Directorate-General.