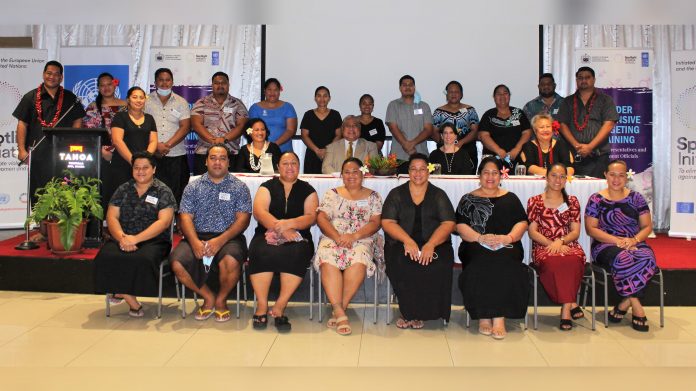 A key factor in advocating for gender equality, is ensuring that resources and the economy
are gender-responsive, this can be achieved through proper planning.

This was the focus of a training workshop coordinated by the Ministry of Women, Community and Social Development with the Technical support of UNDP Spotlight Initiative. The Training was an Introductory Course on Gender Responsive Budgeting.

The Chief Executive Officer of the Ministry of Women, Community & Social Development,
Dr. Mema Motusaga delivered the keynote address at the events. She used the analogy of a ‘person singing solo for a long time, ends up losing their voice’ to emphasize the importance of strong partnerships to ensure not one, but many are singing the gender song.

Upon completion of the Introductory Training Course, a draft of the Gender Responsive
Training Manual was handed over to the CEO of the Ministry, in anticipation of an official hand over of the finalized document in the near future.

Most importantly, an Informal Core Group to advocate for Gender Responsive Budgeting was formulated. This group consists of selected representatives from Civil Society Organizations and government Ministries who completed the training and were awarded certificates in May.

This core group held their first dialogue last Thursday the 9th June 2022 at the SSAB Conference Room, Togafuafua.
The meeting objectives were to;

– To reach consensus on the establishment of the Samoa GRB Core Group by selected
partners of the Introductory Trainings;

– To reach agreement on the Key Roles and Responsibilities of the Samoa GRB Core Group
in its initial informal status and in anticipation of a more formalized make up in the
future; and

– To co-create a practical and well-resourced Work Plan to support the work of the Samoa
Core Group and its most immediate priorities within the next 12 months.

This Informal Core Group is overseen by the Think Tank Committee consisting of the CEO of SUNGO, CEO of the Ministry of Women, Community and Social Development as well as the CEO for the Ministry of Finance.

The Training and the development of the Informal Core group for Gender Responsive
Budgeting was technically facilitated by Tupuimatagi Palanitina Toelupe of T&T Consult with the assistance of the international Consultant – UNDP Sabrina Aguiari, who supported the
work on a virtually.

Gender Responsive Budgeting is a skill to ensure that the resources are invested in a way
that benefits all people regardless of their genders. It is crucial that budgeting and allocation of resources recognizes the needs of all people, most particularly the most vulnerable groups and women and girls. This requires good understanding of the formulation of budget key performance indicators that are gender responsive. In addition, the participants were taught on the importance of understanding where in the budget cycle a gender responsive analysis is made to ensure gender equity is realized during implementation and in the activity outcomes.

MWCSD acknowledged the continuous of the Spotlight Initiative (UNDP) for the financial andtechnical support which helped the Ministry see the realization of this long time coming
dream.

The Ministry of Women Community and Social Development is the focal point for Gender
Equality and Social Inclusion since Samoa ratified the Convention on the Elimination of
Discrimination against Women (CEDAW) in 1992. Samoa became legally obligated under the Convention to develop necessary legislation to give domestic effect to CEDAW, encouraging collaboration with partners and service providers and utilizing social development skills and knowledge.