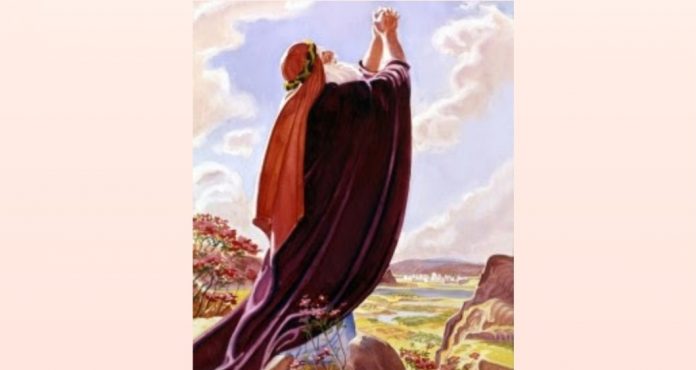 God’s Word for Times Like These is a series of 10 inspirational Bible reading notes produced by Scripture Union International as the world tries to cope with the immediacy and the urgency of Covid-19. As the threat of the unknown looms large, as the anxiety of the heart overtakes the head’s ability to make rational decisions and as world leaders try to find solutions to the worst health and economic crisis of our time, reality has never hit home stronger. In such a situation, where do we turn? What brings us hope? What brings us encouragement? In the words of Peter, “Lord, to whom shall we go? You have the words of eternal life”. John 6:68

So, whether you’re turning to God’s Word on screen, online – may the Word breathe life into our tired, exhausted, lonely, discouraged, disturbed, anxious hearts.

22 The men turned and started toward Sodom. But the Lord stayed with Abraham, 23 who asked, “Lord, when you destroy the evil people, are you also going to destroy those who are good? 24 Wouldn’t you spare the city if there are only fifty good people in it? 25 You surely wouldn’t let them be killed when you destroy the evil ones. You are the judge of all the earth, and you do what is right.”

26 The Lord replied, “If I find fifty good people in Sodom, I will save the city to keep them from being killed.”

27 Abraham answered, “I am nothing more than the dust of the earth. Please forgive me, Lord, for daring to speak to you like this. 28 But suppose there are only forty-five good people in Sodom. Would you still wipe out the whole city?”

“If I find forty-five good people,” the Lord replied, “I won’t destroy the city.”

“Even for them,” the Lord replied, “I won’t destroy the city.”

30 Abraham said, “Please don’t be angry, Lord, if I ask you what you will do if there are only thirty good people in the city.”

“If I find thirty,” the Lord replied, “I still won’t destroy it.”

31 Then Abraham said, “I don’t have any right to ask you, Lord, but what would you do if you find only twenty?”

“Because of them, I won’t destroy the city,” was the Lord’s answer.

32 Finally, Abraham said, “Please don’t get angry, Lord, if I speak just once more. Suppose you find only ten good people there.”

“For the sake of ten good people,” the Lord told him, “I still won’t destroy the city.”

33 After speaking with Abraham, the Lord left, and Abraham went back home.

This passage is a challenging one, involving God’s judgement on two cities. In the midst of this stands Abraham. As you read this passage, did you notice how persistent Abraham was? He continued to call out to God to answer his prayers. Abraham cared so deeply for his friends and family that he never gave up asking for God’s intervention. In these uncertain times, whilst the global pandemic spreads, we can choose to be like Abraham. We can call out to God on behalf of the vulnerable, and our friends and families. Imagine what Abraham would have thought as he spoke to God? Did he have his nephew, Lot’s family, on his mind? Would he have felt relieved that he had not chosen those lands? Did he think that God was being harsh and the judgement was too severe?

In Samoa, choose a group of people who are affected by the lockdown and pray for them.

Sellers at the market with less income; workers that have been laid off and lost their jobs; small business owners who have had to close down; women, fishermen, farmers who used to sell their produce to hotels and restaurants; children who have not been able to travel and say goodbye to their parents before the call of death; victims of domestic violence in lockdown with their abusers; families whose homes have been broken into; children overseas for school who are away from family in Samoa at this time;..

Pray for leaders, medical professionals and patients across the globe.

And pray for our leaders here in Samoa. For wisdom, discernment and God’s love to be upon them

Can you think of something now, or from previous years, that you kept asking your parents to do? Talk about these together. What was the result of this persistent asking?

Abraham asked God a question six times because he was concerned for the people he cared about. It doesn’t hurt to ask.

Today we can have confidence in knowing:

What is something that you want to ask God today? This might be something your whole family wants to ask for together. Write it down and put it into a box on your meal table or somewhere you can see it regularly. Whenever you eat this week, have someone read it out, and then pray for it, together.

Lord during these times of uncertainty, we plead for the world that is suffering. Have mercy on us. Amen