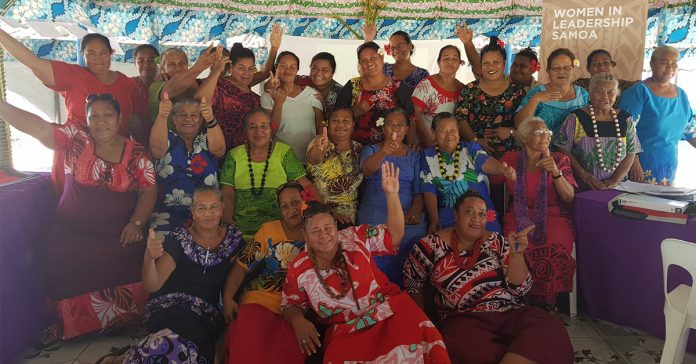 The Village Leadership Development Initiative’s (VLDI) aims to enhance the leadership pathways for women as well as men in the communities. The VLDI also identifies the challenges hindering women’s leadership; encourages collaborations to create initiatives to break through these barriers; recognize women’s contribution to leadership at the community level and strengthening gender equality in Samoa.

Taulapapa Alanna Mapu, Programme Manager for the WILS Project stated, “to increase women’s participation and leadership at the national level, we need to start by recognizing and supporting the leadership pathways of women in the village and district level. The support of men and boys is equally important in creating that enabling environment for women’s leadership. This training is done in partnership with the Ministry of Women, Community & Social Development (MWCSD) targeting the members of the District Development Committees with the overall goal of communities leading community development”

This training is organised and facilitated by the Women in Leadership in Samoa (WILS) Project, a three year project implemented by the United Nations Development Programme (UNDP), UN Women with funding from the Australian Government in partnership with the Government of Samoa.

One of the participants stated “My dream is after this leadership training, a voice for women is recognised more starting from within the family, churches as well as village setting through village council meetings”, Fouvale Moafanua – Faletagaloa