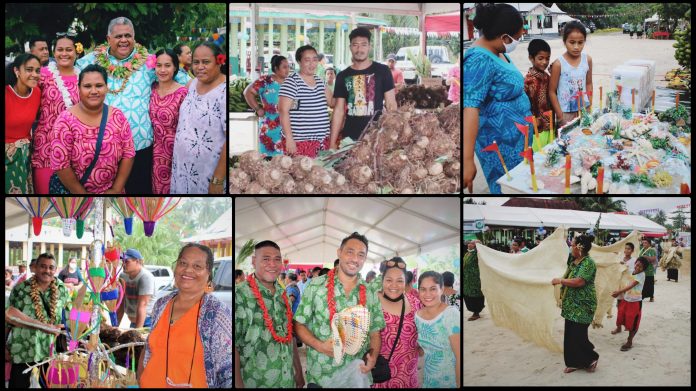 The event was organized by the village Talomua committee for the farmers and fishers to showcase a variety of agriculture and fisheries produce including root and tree crops, vegetables and fruits, fish and giant clams, as well as livestock. In addition, the Gagaifolevao Women’s Group (Faletua & Tausi ma Sa’oao & Tamaita’i) displayed fine mats (ie toga) and handicrafts as part of this year’s Talomua celebration.

The National Anthem was played as the Samoan flag was raised to launch the Talomua program, followed by formalities of a prayer service, opening remarks and keynote address by the Minister of Agriculture and Fisheries, Honourable La’aulialemalietoa Leuatea Polataivao Fosi Schmidt.

Also in attendance was the Minister of Commerce, Industry and Labour, Honourable Leatinu’u Wayne Fong, and Member of Parliament of Lefaga and Faleaseela, as well as other dignitaries.

Chairman of the Gagaifolevao Talomua Organising Committee, Su’a John Pasina welcomed and thanked the government on behalf of the village for their continued support throughout the years.

Su’a Faiaoga Tanielu, a member of the Committee remarked on their preparations leading up to the event. Su’a Tanielu voiced the need by their village fishermen to enable fishing and other related development activities beyond the reef through proper administrative structures.

In the Minister’s speech, Hon. La’aulialemalietoa congratulated the organising committee and residents of Gagaifolevao for putting together a remarkable event.

He also commended the support and valuable contribution by the Women’s committee. He emphasized the importance of working in close collaboration with the Ministry of Agriculture and Fisheries for support to boost development in crops, livestock and fisheries for food and income security.

As part of the Ministry’s role in supporting village-led agriculture events, farming tools and equipment, seeds and seedlings of various crops, and juvenile giant clams were provided for the farmers and fishers of Gagaifolevao, Lefaga.