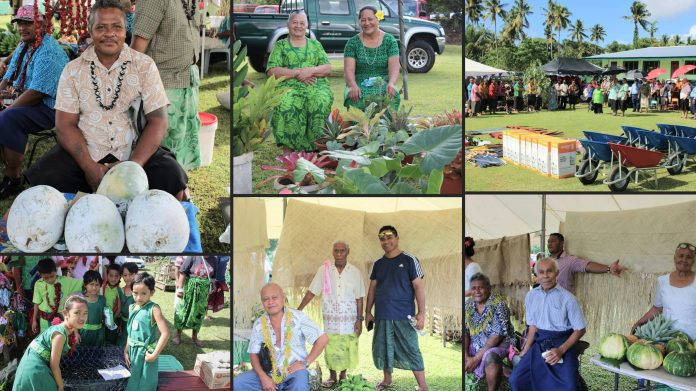 Apia, Samoa Friday 17th June 2022, Farmers and fishers from the villages of Patamea, Samalaeulu, Mauga and Saleaula of the district of Gagaemauga number 1 in Savaii gathered to showcase their First Harvest (Ulua’i Seleselega) as part of their celebrations of the 60th Independence of Samoa.

The First Harvest event took place at the grounds of the Samalaeulu Primary School and it was held in conjunction with the official opening of their new school hall funded by the Government of Japan.

The event was attended by the Hon Acting Prime Minister who is also the Member of Parliament from Gaegaemauga No 1, the Speaker of Parliament, Hon Ministers of Education, Sports and Culture, and Justice and Court Administration, Associate Ministers of Agriculture and Fisheries, and Women, Community and Social Development, Ambassador of the Government of Japan, Vice Chancellor and President of the University of the South Pacific, and Rev Palemia Tauiliili of Samalaeulu EFKS who raised the national flag and conducted the devotional service for all the events held as part of the district’s 60th independence celebrations.

In his speech, the Minister of Agriculture and Fisheries, Hon La’aulialemalietoa Leuatea Polataivao Fosi Schmidt emphasized the significance of the initiative and drive by the Government to promote First Harvest events in districts, rather than the two national agriculture and fisheries shows held annually in Upolu and Savaii in the past.

Holding such events in districts provides every farmer and fisher with the opportunity to participate and showcase his/her fruits of harvest for sale to the visitors and especially exporters.  He also emphasized and promoted the urgent need for our people to farm their available fertile lands to sustain our food and nutrition security given the recent increase in prices of imported unhealthy food products that we are so accustomed to given their ease and convenience of preparations.

There are also various nutritious foods that we can locally produce to contribute towards our import substitution efforts via sales to the local markets. Finally, he encouraged the farmers and fishers to utilize the opportunity during their First Harvest event to negotiate with participating exporters, for future supplies for export markets, which will generate additional incomes for their hard work.

Hon La’aulialemalietoa also spoke of the importance of studying Agriculture and encouraged the younger generation of the district to consider agriculture as a field of study to pursue in the future.

A representative of the Savaii Foods and Produce Exporters, Ms. Veronica Ah Chee, was present at the event and shared that it has provided her with the opportunity to explore and buy different varieties of crop produce for her export consignments.

The First Harvest Organising Committee for Gagaemauga No 1 District comprising of Vaifale Mokoi, Vaifale Vea, Tevaga Mai, Semau Iosua, Tevaga Vui and Vaifale Petelo, requested for Government’s assistance to provide more equipment and tools to improve agricultural development in their district as well as more coconut seedlings for replanting to revitalize the coconut production in their district.