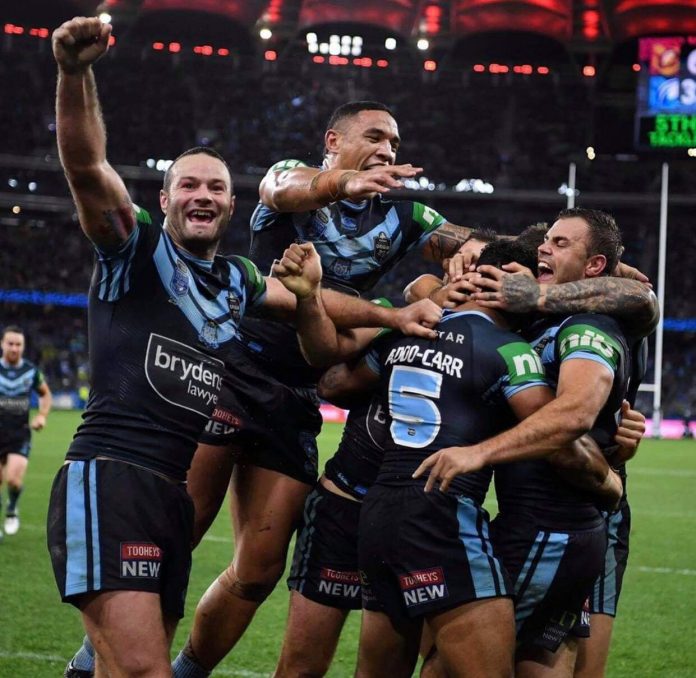 24 June 2019, Apia Samoa. The New South Wales (NSW) Blues have forced a Game 3 decider after putting together what can only be described as a masterpiece performance, hammering away the Maroons by 38 points to 6 in Perth last night.

NSW coach Brad “Freddy” Fittler named his Game 2 squad a week ago, and has since been criticised for making 7 changes to the Game 1 team.

These 7 decisions were described by award winning sports journalist Phil Rothfield as “panicking”.

Last night, Freddy responded to the criticism he has had to cop all week, by putting together one of the best rugby league performances by a Blues outfit.

The Blues came out firing when two of Freddy’s “panicking decisions” James Maloney and Tom “Turbo” Trbojevic combined to put the Blues up by 6.

As expected in a State of Origin match, this lead didn’t last long as the Maroons struck back eight minutes later with a penalty try through the hard work of Melbourne Storm centre Will Chambers.

James Maloney was involved in another try after a bit of razzle dazzle passing put second rower Tyson Frizell in for a try and push the Blues lead back to 6 points.

The Blues went into the second half with an 18-6 lead after Tom Trbojevic crossed over for his double on the back of some brilliant dummy half running by fullback James Tedesco.

Queensland came out in the second half and gave away two silly penalties that lead to another four easy points for the Blues, taking the score to 22-6.

With 30 minutes still to go, and the Maroons’ reputation to make late comebacks, NSW did not take the foot off the throttle as Tom Trbojevic completed a hat-trick.

This brought the lead to 28-6 and made it very difficult for the Maroons to make a comeback.

Another one of Coach Fittler’s “panicking decisions” Wade Graham put the game away with two slick try-assists for winger Josh Ado-Carr.

The final score was 38-6 with the decider to be played in Sydney on Wednesday July 10th.