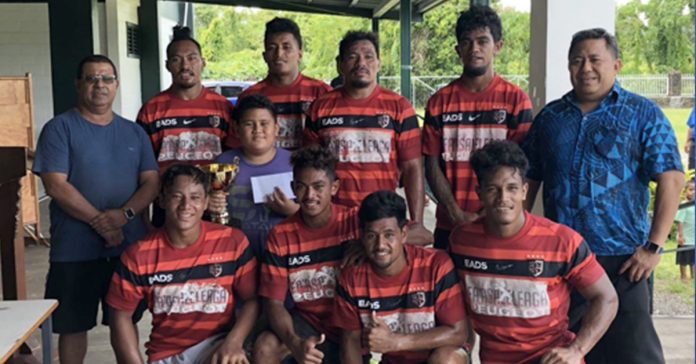 PR: Frankie Tama Uli has done it again. The boys from Salelologa have won the first leg of the FRANKIE SAVAII 7’s which was launched last weekend at the Don Bosco Field, Salelologa. The Frankie sponsored team made sure they kick-start 2019 season on a high note.

The two undefeated teams at the end of the tournament were Iva White Lions and Frankie Tama Uli. However, the Matamua Junior Salima’s coached-side was too good for Meki Magele and the Iva White Lions boys.

In early minutes of the much anticipated Cup final, Iva White Lions was on attack and lost possession five meters away from the tryline. Salelologa counter attacked and sent youngster Gasologa Pauli with a 90 meter try which was converted by Paulo Toilolo. A brilliant kick-off saw Frankie Tama Uli retain possession and attacked Iva White Lions on wide ends of the Don Bosco field and saw another 5 pointer opportunity to hard running speedster Uaina Sione adding another 5 points for his team. Paulo continued with his excellent boot and extended the lead to 14 points to nil. In the second half, Tama Uli came back strong with two tries from blockbusting rover, Tipa Sapeti and speedster Uaina Sione with Paulo Toilolo securing both conversions. It was all one sided final with 28 points lead, Iva White Lions tried to capitalise in the dying minutes but still no chance to cross the Frankie Tama Uli scoreline.

In other results, Frankie Tama Uli sent Lalomalava for an early shower after a brilliant run in the Cup Semifinals and demolished them 33-0. Iva White Lions made a statement themselves when they defeated the tournament favourites Lupe o Siliva in the first Cup Semifinals 19-7.

During pool plays, Iva White Lions recorded a win over Frankie Salelologa (19-5) and also beat Faga (10-5) to book a Semifinal place. Lalomalava started its day with wins over Salelavalu (24-5) and Lupe o Siliva (10-5). Frankie Tama Uli recorded wins over Sapapalii (35-0) and Salelavalu (28-0) to secure a Cup Semifinal appearance. Lupe o Siliva scored a win over Salelavalu 2 (43-0) and lost to Lalomalava (10-5) and thanks to their huge win in the first game that secured them a spot in the Cup Semifinals.