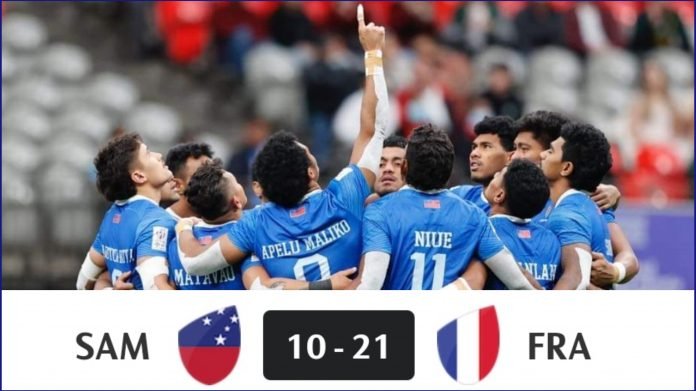 After putting away Kenya by 31-5 this morning, the Manu Samoa 7’s have not been able to secure the win in their second pool match against France in Hamilton.

The Cape Town champions were starved of possession by a relentless French side, who looked to have been the more determined team on the day.

Samoa started off great with a try to Paul Scanlan from the first kick-off. A suave inside pass from Apelu-Maliko put the Moataa backliner into space and over for Samoa’s first try. Unconverted, the Manu led by 5-0.

France hit back straight away with a try of their own when an off-load ball found the French captain Paulin Riva who strolled under the sticks and put his side ahead 7-5 after the conversion.

Samoa’s second try was gifted to winger Owen Niue from none other than Faafoi Falaniko. The 21 year old pulled a dummy, bumped off a French defender and drew two more French players in with a side step before getting the ball away to Niue, who just needed to cross over the line.

Manu would have gone into halftime with a 10-7 lead, but a determined French side kept the ball alive for two minutes after the halftime hooter. The French attacked and attacked until a desperate Samoa defense gave way, and France went over to secure a halftime lead of 14-10.

Samoa went into halftime down by just 4, but a yellow card issued against Owen Niue for a dangerous tackle would mean they start the second half with just six men.

Down by one player, the Manu 7s held off the French for the first two minutes of the second half.

The French threw off the Samoa defense with a wide-wide approach on attack. Samoa put in the tackles but the French were determined and kept taking the ball from the right edge to the left and back to right, waiting for Samoa to concede a penalty.

At one point, France looked sure to score a try when the ball went to the left edge but smallest man on the field, Neueli Leitufia put in a brilliant try saving tackle. Faced one-on-one with the French wing on the left edge, Leitufia went in with a perfectly timed wrap around the waist tackle that forced the French wing out to touch.

Samoa had the opportunity to take back the lead when Taunuu Niulevaea, on his 23rd birthday today, made a break from inside Samoa’s 22. The 106kg  6’2″ forward shocked the French defense with his speed as he powered down the paddock into France’s red zone.

Support arrived on time and Samoa looked to have set themselves up for a try when the ball was once again lost in the tackle.

The French capitalized on the error and turned the tables around by putting in a 60m run of their own and score under the post.

With Uaina Sione sustaining an injury against Kenya, Samoa struggled to secure clean ball in the rucks. Samoa worked hard in the remaining two minutes and the fresh legs coming in seemed like too little too late.

As the clock ticked down to full time, the 11 point deficit seemed to dampen the spirits of the young Samoa side.

Samoa are up against Fiji for a must-win game at 4:06pm.

France play Kenya at 4:54 pm, and no doubt every Samoan across the globe will be cheering for Kenya to win. Kenya is being coached by former Manu Samoa 7s head coach, Damien McGrath.