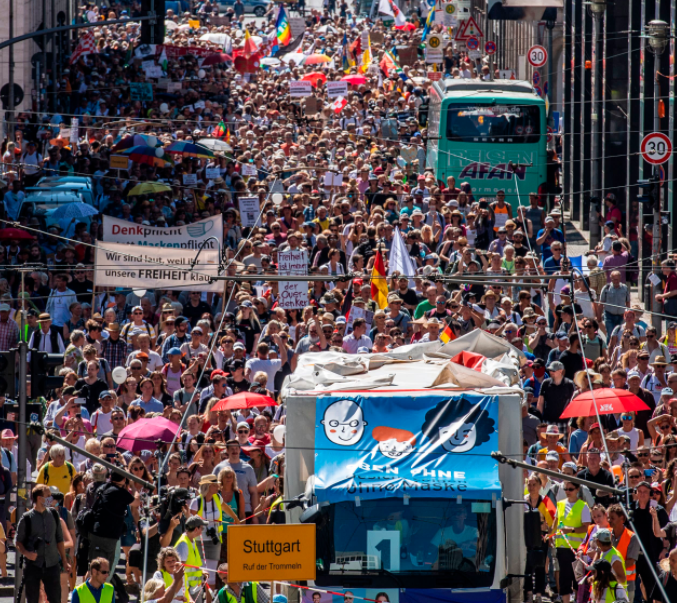 Germany is being hit hard with its fourth wave of the global pandemic, with the number of daily new infections being higher than ever before.  In the past 24 hours, the country recorded 64,164 new cases of covid-19, with 261 new deaths taking its overall death toll to 99,169 as of Friday morning.

Germany’s Chancellor Angela Merkel has described the Covid-19 situation in her country as “dramatic,” as the country registers “a frightening daily death toll”.

“The fourth wave is hitting our country with full force,” Merkel told an event for the Association of German Cities, according to a translation by Deutsche Welle.

The number of new cases has roughly doubled in two weeks and leaders of Germany’s 16 states agreed after crisis talks with Chancellor Angela Merkel to take tougher measures to help curb the infection rate.

Germany’s leaders have this week agreed to impose laws on the unvaccinated, with plans to shut them out of restaurants, sporting events and cultural shows as the country battles to halt the record rise in Covid infections. Those not immunised would also be made to provide negative tests in order to use public transport or go to the office.

To protect the most vulnerable, they also agreed to introduce compulsory vaccination for healthcare workers and employees in elderly homes.

“We need to quickly put a brake on the exponential rise” in cases and intensive care bed occupancy, Merkel said.

Unvaccinated people will be banned from certain public spaces in areas with a hospitalisation rate of more than three patients per 100,000 people over the past seven days.

Currently, all of Germany’s 16 states except Hamburg, Lower Saxony, Schleswig-Holstein and Saarland have a rate above three.

The so-called “2G” rule — allowing in only the vaccinated and the recovered — will apply to large events as well as leisure and sports facilities.

“With the current dynamics, we are running into a very, very difficult situation, especially for all the people who work in hospitals and especially in intensive care,” said Merkel.

The outgoing chancellor urged more Germans to get vaccinated, saying bluntly that “many measures that now have to be taken would not have been necessary if we had more vaccinated people”.

Last month, Bayern Munich soccer star Joshua Kimmich sparked a nationwide debate over vaccinations after admitting he had opted not to get the jab.

After a strong push in the spring, Germany’s inoculation rate had stagnated over the summer to hover at just under 70 percent.

Despite infections soaring in recent weeks, politicians have been accused of inaction and of focusing their attention instead on negotiations to form Germany’s next government after elections in September.

The political tangle was on full display earlier Thursday in the lower house of parliament when a heated row broke out as MPs were asked to vote on a bill providing the legal framework for Merkel and the regional leaders to deploy the new measures.

The three political parties in talks to form Germany’s next government had drawn up a new draft law to replace ongoing legislation set to expire on November 25, passing it in the Bundestag where they have a majority.

But Merkel’s conservative CDU-CSU bloc says the new bill is weaker than the incumbent law, and has threatened to defeat it on Friday at the upper house of parliament — something that could yet delay decisions taken by the regional leaders on Thursday.

One of the country’s top immunologists Lothar Wieler, has voiced frustration at the political stalemate.

“We don’t have to keep inventing something new. All the ideas and prescriptions we need are available,” he said.

“After 21 months, I simply can’t stand it that what I’m saying and what other colleagues are saying is still not being accepted,” he added.

Wieler warned that the actual number of infections may be up to three times higher than official data indicate as many infections go undetected or untested.

“We are currently in a serious emergency. We will really have a very bad Christmas if we don’t change course now,” he said.

The World Health Organization on Tuesday also cited Germany, along with Russia and Britain, as the countries with the most new cases in Europe.

Coronavirus has claimed over 5 million lives since it took the world by storm in late 2019. There are currently 256 million active cases world wide with 231 million registered recoveries.