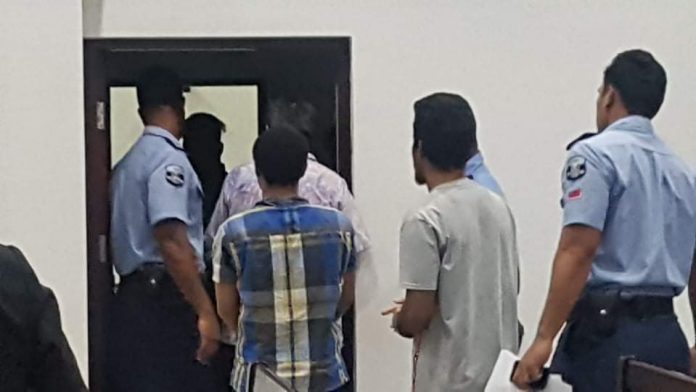 Four youth facing charges in relation to the death of Chinese national Mr Cao Yaqunh during a robbery of the Pacific Trade Industrial premises at Vaitele last October, have all entered guilty pleas.

In a widely publicised incident last October, the four youth were arrested after an invasion robbery of a warehouse business premises left one man dead and three seriously injured from stab wounds.

At the time, Police Commissioner Su’a Fuiavailiili Egon Keil confirmed that a bush knife and a smaller knife covered in blood were recovered from the scene. He added that robbery was the motivating factor with Chinese businesses known for having large sums of cash on their business premises.

All four men have entered guilty pleas before Justice Tafaoimalo Leilani Tuala-Warren in Samoa’s Supreme Court, and the 10th of June 2020 has been set for sentencing.

The youngest of the youth, 18 year old Gogosina Leilua, vacated his not guilty plea and entered a guilty plea through his lawyer Leiataualesa Komisi Koria in March this year.

Gogosina’s older brother Mikaele Leilua and another youth, Tafi TJ Samuelu have pleaded guilty to being armed with a dangerous weapon.

Kome Sioeli now 22, started offending and appearing in Court when he was just 17 years old. When remanded in custody for this incident, it was then revealed in Court that Kome had several outstanding warrants of arrest against him with a long list of previous convictions and pending charges.

Kome Sioeli had been in and out of Samoa’s correctional and rehabilitation facilities for the past 5 years.

An uncle of Tafi TJ Samuelu told Samoa Global News that his nephew is best friends with Gogosina Leilua. According to Jason who has a small lawn mowing business, the boys were running away after the burglary when they heard the elder of the two brothers, Mikaele Leilua, calling out for help; “fia ola”.

Jason said that when his nephew and the others ran back, they saw Mikaele tied by the neck and bleeding from his arm. He says Mikaele sustained injuries to his arm from placing it up to stop an alleged knife attack to his head.

He said it was at that time that the Gogosina Leilua reacted to defend his older brother.

According to Jason the boys are troubled youth from Vaiusu and Vaigaga.

Member of Parliament for Urban West Faumuina Leatinuu Wayne Fong came forward to apologise on behalf of the youth of his electorate stating that he believed the incident was not a hate crime but rather a case of youth knowing that Chinese businesses typically keep large sums of money on their premises.

“I encourage all Chinese Companies to please bank their takings daily and avoid holding money in their homes and businesses. It is a risk and a very dangerous one that you take because you are opening yourself to being targeted by thieves,” said Faumuina at the time.

“I don’t believe that this is a hate crime and we don’t hate Chinese”.

Associate Minister for Communication and Information Technology Lealailepule Rimoni Aiafi was the first to speak out about the incident at the time, stating that a marked breakdown in our cultural practices and traditions has led to such violent crimes.

“So it’s unemployment, lack of education, bad upbringing and being out of touch with the foundations of church and culture,” Lealailepule had said at the time.