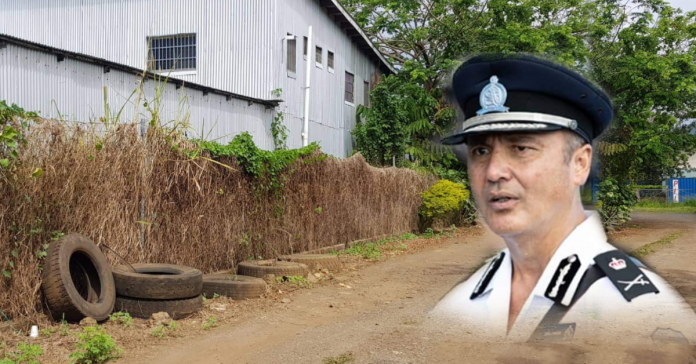 Four men have been arrested in relation to the invasion robbery at Vaitele on Saturday night that left one man dead and three seriously injured from stab wounds.

Police Commissioner Su’a Fuiavailiili Egon Keil  confirmed that more are involved and that it would only be a matter of time before they too are arrested.

“We now have their personal information and we are moving to have them brought into custody soon,” said Police Commissioner Su’a Fuiavailiili Egon Keil.

The Police Commissioner confirmed that a bush knife and a smaller knife covered in blood were recovered from the scene and that robbery was the motivating factor.

The business belongs to Mr Lin, who has operated as a businessman in Samoa for over 15 years, and is well known to the retail industry for supplying shopping bags to retail stores across Samoa.

They originally supplied plastic bags, but did shift to the colorful re-usable shopping bags now seen at check-out counters since Samoa’s move to a plastic free environment.

Speaking at his weekly program with TV1, Prime Minister Tuilaepa Sailele Malielegaoi says the police have confirmed that all four men are youth in their 20s, from Vaiusu and Elise.

“The police have informed me that they have four in custody, and they would be in their 20s these kids who have committed murder;

“And they are kids from Vaiusu, and Elise,” said the Prime Minister.

The Prime Minister who is also the Minister of the Samoa Police Service says Village Councils as well as Churches must look at ways to address the development of at-risk youth now seen committing serious crimes.

“These youth have wasted their lives, all in their 20s and now facing murder charges. Village Councils of Vaiusu and Elise should meet and ensure that the families are dealt with.”

“Youth should also know that most shops are now equipped with security cameras so they would easily be identified.”

The Prime Minister also reiterated the need for businesses to bank daily takings and not make it a habit to keep cash on hand.

“Business people should make sure they bank their income; it is not good for foreign investment that a businessman is attacked and killed during a robbery like this.”

Asked if he thought this was a hate crime towards Chinese, the Prime Minister said that racism is not a new mindset amongst the Samoan people.

“There are two races that Samoans have always been racist towards. People who are dark-skinned and Asians”.

According to the Prime Minister, some people who show this racism have Asian last names.

“Incredibly, sometimes those who are complaining about Chinese are also part Chinese themselves. So that’s the Samoan in them.”

Mr Lin’s business was closed today, as he is still recovering in hospital.  The deceased man is a relative of Mr Lin and the other two injured men are Mr Lins his son and younger brother.