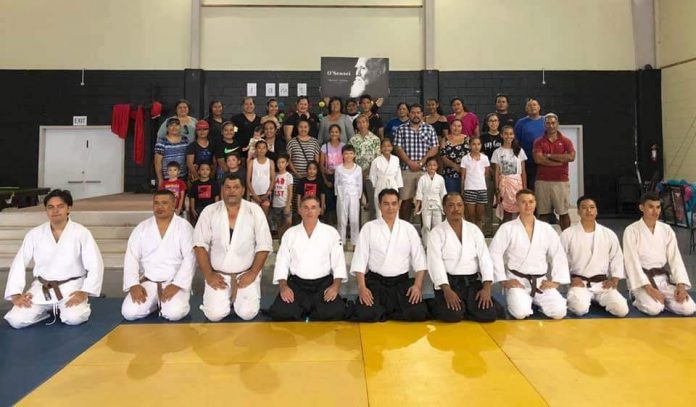 Aikido a traditional Japanese martial art was formed in the early 1900’s by the founder of Aikido the ‘O Sensei’ Morihei Ueshiba as a synthesis of his own martial studies that included a number of the old armed and unarmed martial art forms known as “Koryu”.

O Sensei’s goal was to create an art based on these older Japanese martial styles but adapted to a society now art peace.

Aikido can be translated as “the way of unifying (with) or harmonizing”. Aikido Samoa combines both unarmed and armed Aikido martial forms into its syllabus with regular practice of Bokken (sword), Jo (staff) and tanto (knife) forms.

Its techniques include incorporates throws and joint locks and atemi (striking) with a foundation of entering, twisting and turning footwork. Overall the aim is to nullify the attacker’s power before it can cause harm.

Aikido Samoa founder, 5th degree black belt Sensei Malcolm Johnston believes this is a very important day for Aikido Samoa “for many years the club had only one senior black belt grade held by me and that was added to in 2015 when the current assisting instructor Ioane Taliu was awarded his 1st degree black belt.

“The members have worked very hard and committed themselves to this discipline for many years to attain this level,” he said.

“We now have a couple of very young black belts who are in their teens and are capable of going a long way in this art.”

Six Degree Black Belt holder Simon Puffett from NZ headquarters attended and joined the examination team on behalf of the Head Master for New Zealand 7th Dan Nobuo Takase Shihan who was not available due to prior commitments.
Aikido Samoa was founded in August of 2005 by Sensei Malcolm Johnston who moved to Samoa from NZ and formed the school as a means to continue his training and to develop the art locally as there was no existing school operating.

Sensei Malcolm returned to NZ in 2014 and the school is being run and administered by the current assisting instructor Sensei John Taliu. Sensei Malcolm continues to guide and support the club with regular visits of at least four times per year.
The Japanese word “sensei” means teacher in English and the word “Dan” means level or grade of black belt.

The normal time to obtain each Dan level is at least five years, however practitioners can spend 20 years or more on some of the higher Dan levels before promotion.

Aikido Samoa celebrated its 10th Anniversary in 2015 at the Tanoa Hotel Ballroom and plans are now underway to celebrate its 15th anniversary in August 2020 at the same location. 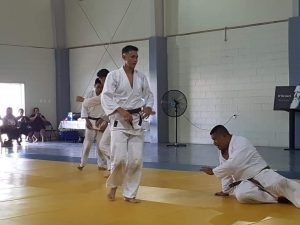 Aikido Samoa’s most notable student and official Patron is the Prime Minister of Samoa, Tuilaepa Sailele Malielegaoi. Sensei Malcolm says “Although he no longer attends regularly he is always welcome to train when he has spare time from his busy schedules. The Prime Minsiter’s favourite techniques were the practice of staff techniques.”

Asked whether Aikido is a good art for all peoples Sensei Malcolm says “Aikido is able to be practiced by men women and children of all ages. Children from 5 years onwards and members in some countries train for as long as they can walk and that can be into their 90’s”