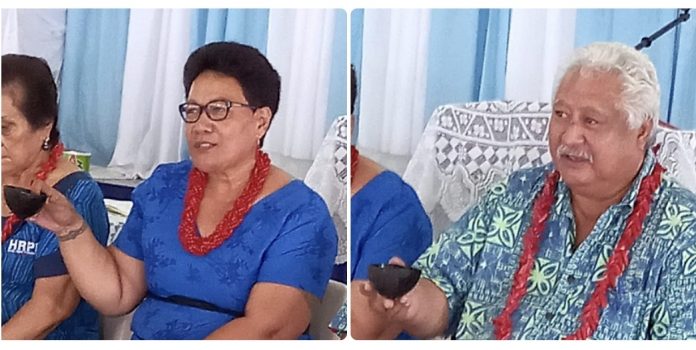 A traditional welcoming cava ceremony (ava o le feiloaiga) was held at the Petesa HRPP party headquarters to welcome two Members of Parliament who had won their seats at the recent by-elections, and two women Members of Parliament appointed under the constitutional special measure to ensure Samoa’s parliamentary seats are at least 10% women.

The official warrant of election issued by the Head of State following six by-elections held in November also appoints Aliimalemanu Alofa Tuuau and Faagasealii Sapoa Feagiai, both of HRPP, as the 5th and 6th women respectively, in Samoa’s Parliament. The two women candidates fought well and attained the highest percentages of votes casted in their respective constituencies. However, the timing of their appointments has come under scrutiny with differences in interpretations of a Court of Appeal decision that sets down the special measure in Samoa’s Constitutional Article 44.

At the HRPP headquarters on Friday morning, former Speaker of the House, Toleafoa Faafisi, spoke on behalf of the four MP’s in a ceremony to formally induct them as members of the opposition party caucus. Toleafoa Faafisi elected himself to speak on behalf of the four MPs, when the traditional debate (faatau) between the orators of Upolu to determine who would speak, seemed to have reached an impasse.

In deciding who should speak, the cultural exchange between orators from Afega and Fasitoo-Uta, that ought to be done within the realms of sacred and respectful va had elevated to conflict levels, giving Toleafoa Faafisi a culturally acceptable opening to take over.

The former Speaker of the House and veteran MP for HRPP then spoke on the occasion of handing over the new MPs. He advised the former Prime Minister, Hon Tuilaepa Dr Sailele Malielegaoi, to maintain humility in order to keep the peace between the two political parties.

In response Tuilaepa challenged the new MPs to be strong and courageous. “There is no room for anyone who is afraid (palaai).. you have to be brave hearted..”

As they received their ava, the four candidates spoke to convey their appreciation to the HRPP party leader and party members for their ongoing support, and thanked Toleafoa Faafisi for his role in the official handover.

With the four additional Members of Parliament, HRPP’s parliamentary seats increases from 18 to 22, while the ruling Faatuatua i Le Atua Samoa ua Tasi party have moved from 26 to 31, having won four out of the six by-elections, plus the Falealupo seat declared uncontested. The Warrants of Election issued after the by-elections takes Samoa’s Parliament from 51 to 53.

The cycle of petitions and by-elections does not end here, as there are several candidates who have indicated their intentions to file petitions against by-election winners. Lolomatauama Eseta has indicated a law suit against Aiono Tile, and Faalogo Ivins says his committee are compiling witnesses for a possible law suit against Maulolo Tavita. Similarly, there are also intentions being made by HRPP’s unsuccessful candidates such as the Falealili and Sagaga 4 seats, also considering their options to file petitions against FAST winners.