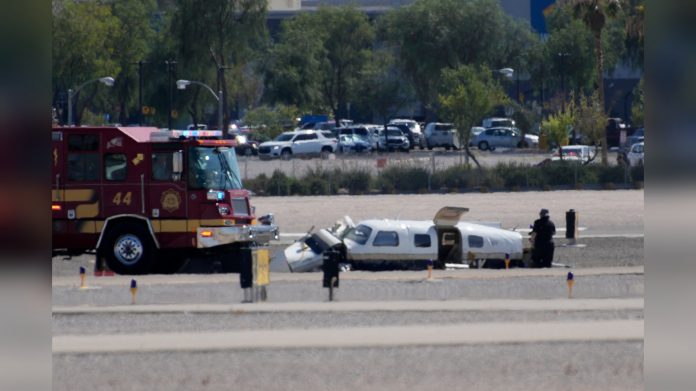 Four people were killed on Sunday when two small airplanes collided in the air over North Las Vegas airport in Nevada, the authorities said.

The planes, a single-engine Piper PA-46, and a single-engine Cessna 172, were preparing to land when the crash took place, according to the Federal Aviation Administration and a fire official.

The impact sent the planes off in different directions: The Piper crashed into a field off the runway and the Cessna fell into a water retention pond, the F.A.A. said, adding in a statement that two people were on each aircraft.

The North Las Vegas Fire Department said on Twitter that the crash, which occurred around noon Pacific Daylight Time, resulted in four deaths. The names of the victims have not been released.

Jake Levesque, a spokesman for the fire department, said on Monday that witnesses reported that the planes were attempting to land when they collided.

He said that one plane was on fire and that the people onboard both planes were “dead on arrival.”

He referred inquiries about the investigation to the National Transportation Safety Board and the F.A.A., which are investigating the crash. A spokesman for the N.T.S.B. said on Sunday that an investigator from the agency was en route to the crash site but did not provide any other information.

Mr. Levesque said that a collision of two planes at the airport was “very rare.” Photos from his department showed that the planes were heavily damaged in the crash, with splintered tails and wings.

In 2003, two pilots were injured when their planes collided on the airport’s runway, according to The Las Vegas Review-Journal. In that accident, one plane was taking off, and the other was landing, the newspaper reported.