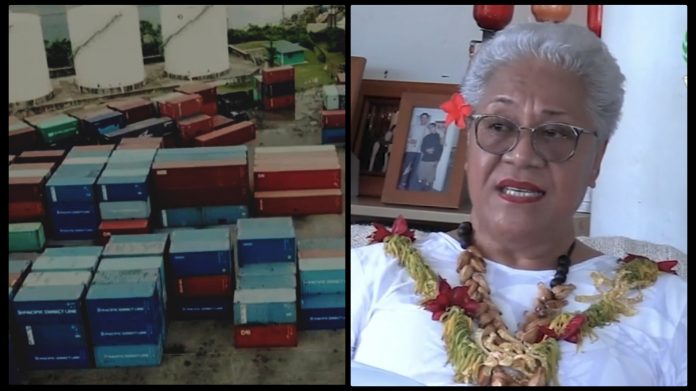 Twenty five frontliners who had worked a cargo ship that offloaded containers of imported goods into Samoa last week, are currently in isolation.

This was revealed by Prime Minister Hon Fiame Naomi Mataafa in an interview with the Government’s Press Secretariat last Friday.

According to an NEOC report, four crew members of a cargo ship which had docked in Apia’s Matautu wharf last Tuesday the 1st of March, were infected with Covid-19.

The container ship offloaded Samoa’s cargo and then headed to American Samoa.

Border control health checks in American Samoa found four of the crew on board the cargo ship tested positive for covid-19.

In line with international relations, American Samoa were prompt to advise Samoa of the test results, the Prime Minister said.

“Which led to the decision by NEOC to gather all frontliners who had been involved with processing the cargo ship, and have them quarantined as a matter of precaution”.

The Prime Minister reiterated that Samoa’s border control protocols with cargo ships at Matautu wharf does not involve any form of contact between frontliners and those on board the cargo ships, except for Health Ministry workers, if they decide to run tests.

The 25 frontliners are to be quarantined and monitored for a period of two weeks.

NOEC have not yet released any test results, from those in quarantine.

Samoa’s vaccination rates for adults above 18 years has reached 90% and boosters are now available for those who’ve been double vaxxed for at least 3 months.

The rollout of children’s vaccinations will continue within schools from tomorrow, Monday 7 March 2022.