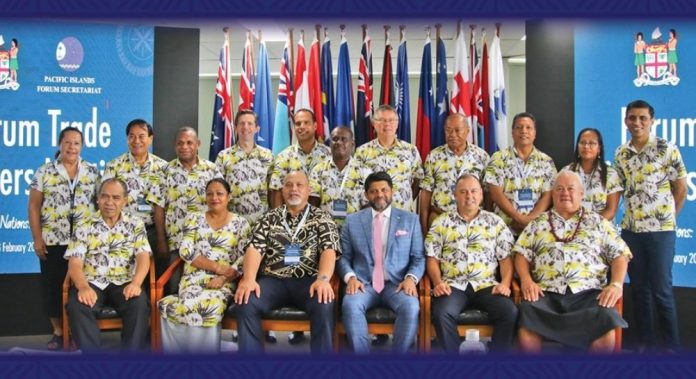 A press release confirmed that Trade Ministers considered the impacts of the  ongoing climate change crisis, as well as the current state of health, on Pacific economies.

According to the release, the World Trade Organisation offered support to address global trade concerns including what was termed as, ‘harmful fisheries subsidies’.

PACER Plus Trade Ministers are said to have confirmed their commitment to bring the agreement into force in 2020 despite the fact that four more ratifications are needed for that to be possible.

The Pacific Agreement on Closer Economic Relations (PACER Plus) aims to create jobs and wealth in the Pacific by making it easier for small island countries to trade. The PACER Plus agreement has the signatures of 11 Pacific Island countries, excluding Fiji and Papua New Guinea. Negotiations took close to eight years from August 2009 to the conclusion of negotiations in April 2017.

The PACER Plus Agreement cannot enter into force unless eight negotiating parties have notified the Depositary (Government of Tonga) that they have completed the neccessary internal requirements for ratificarion.

The PACER Plus Work Programme and broader Aid for Trade assistance includes support to build:

The meeting confirmed the establishment of a PACER Plus Implementation Unit to implement the Work Programme and offer support.

Samoa will host the 4th PLMAM in Apia, tentatively scheduled for October this year. Issues arising out of PLMAM will now be on the Forum trade agenda.

“Ministers committed to ensure the PLMAM remains an open and inclusive forum for regional dialogue while preserving its benefits for the implementation of labour mobility advantages for PACER Plus members”.

According to the press release, any further discussions on the direction of PICTA can only take place once the modernisation work on PICTA is completed. That work includes a review of the Rules of Origin towards effective implementation.

The Pacific ACP Trade Ministers deliberated on the Pacific – EU trade relations including the status of negotiations for a Post-Cotonou agreement that will reset the development relationship, including that of trade between the broader ACP grouping and the EU, for the next 20 years.

PACP Trade Ministers also noted the United Kingdom’s exit from the EU and the Pacific–UK Interim Economic Partnership Agreement which now exists as a consequence of Brexit. It was agreed that an assessment of Brexit implications on PACP trade relations would need to be further considered.

PACP Trade ministers also witnessed the signing, between the EU and Regional Authorising Officer, of the Financing Agreement for the Pacific Regional Integration Support Programme (PRISE).

PRISE will deliver support to increase intra-regional and international trade; and increase the participation of the private sector in economic integration including specific support to implement the Interim Economic Partnership Agreement of which Samoa is a Party to.

Discussions on kava, as an important alternative cash crop for the Pacific, will be maintained at regional and international fora including determination of how to enhance market access and market diversification for kava and kava products.

At side events the Honourable Lautafi Purcell was honoured to speak on the commemoration of 40 years since the Pacific Trade & Invest Australia Office was established; and at the University of the South Pacific (USP) – Fiji Trade Ministry Panel discussion held at the USP.