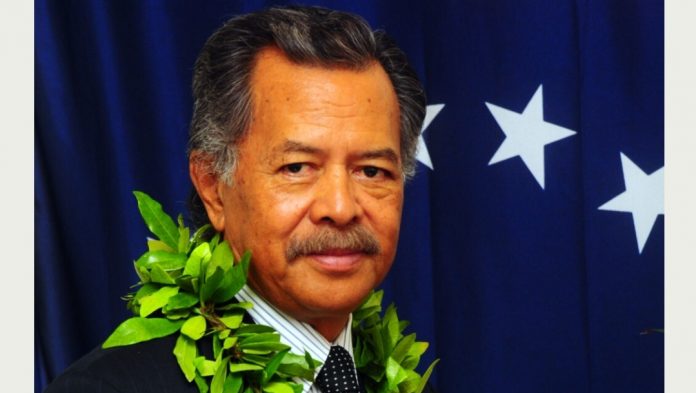 Former Prime Minister of Cook Islands, Henry Puna is the new Secretary General of the Pacific Islands Forum, after a close 9-8 vote amongst Forum Leaders during a virtual retreat last night.

Mr Puna resigned as Prime Minister last September to be eligible to put his hand up for the regional post.

Outgoing Secretary General, Papua New Guinea’s Dame Meg-Taylor held the post for two terms over the last six years; as did Tuiloma Neroni Slade of Samoa who held the post from 2008 to December 2014.

Henry Puna was voted in over Micronesia’s candidate, Marshall Island’s Ambassador to the US, Gerald Zackious.

The position of Secretary General of the Pacific Island Forum has always been selected by vote of Forum Leaders, however, the lead up to the meeting was contentious with Micronesian leaders insisting there was an agreement to rotate the Secretary General post, and that it was the turn of Micronesia.

Gerald Zackios had the backing of five Micronesian countries but could not get support from the 17 Pacific leaders at the retreat.

Fiji withdrew its candidate Ratu Inoke Kubuabola but leaders still could not reach consensus and two rounds of voting were carried out.

In the first round of voting Mr Puna polled seven votes with Mr Zackios on six, and Solomon Island’s Jimmie Rodgers on three, while a single vote went to Tonga’s Amelia Siamomua.

Ms Siamomua withdrew and in the second round of voting Mr Puna polled nine votes to eight against Mr Zackios and no votes to Jimmy Rodgers.