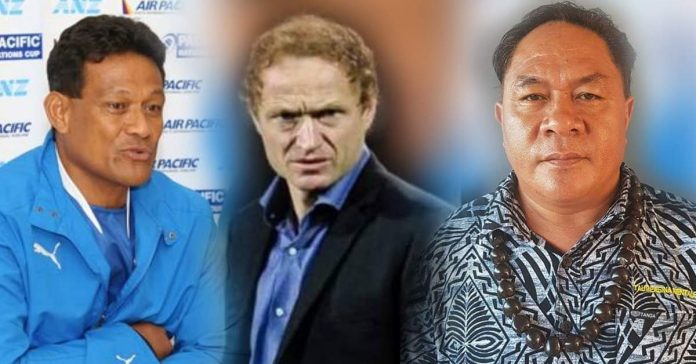 30 September 2019 Apia Samoa. Two former Samoa international reps who have also coached the Manu Samoa 7s and 15s have hit back at Tony Brown’s behaviour during a media conference where he fuelled the Rugby World Cup refereeing debate by highlighting the tackles made by Ed Fidow and Motu Matuu during Samoa’s opening match against Russia.

Speaking at a media conference after Samoa’s 34-9 win over Russia, the former All Black who is now an Assistant Coach for Japan publicly questioned why  two “brutal tackles” didn’t receive red cards.

Tony Brown was unhappy with the decision to let the two Samoan players get away with just sin-binnings and publicly challenged the tournament commissioners to cite the players.

“So I watched the game last night and saw two brutal tackles that should have been red cards, and a punch to the head that didn’t get noticed,” Brown had said at the media conference.

He then played a role reversal by turning questions on the media.

“I’ve just got a question for you guys?,” says Tony Brown.

“Has anyone heard any feedback of what’s happened there? Have they cited the players?”

Brown made no reference to the third dangerous tackle of the night where Kirill Gotovtsev tackled Afaesetiti Amosa around the neck, pulling him down and causing him to awkwardly twist his knee, bringing an early end to the world cup campaign for Samoa’s power No 8.

The two Samoa players were subsequently cited and each handed 3 week sanctions, ruling them out of the pool stage of the tournament.

In his column for The Times, Debney described both incidents as “obvious red cards missed”.

“What do you have to do to get sent off in this Rugby World Cup?”

“Lee-Lo could have killed him,” Debney wrote.

Former Samoa International and rugby coach Fainuulelei Tiumalu Matamua Filipo Saena disagrees. Saena has hit back saying the 3 week ban is a harsh decision and Manu Samoa management should have lodged an appeal.

“There was a very low degree of danger in the tackle, not high as described because the tackle impact was on the chest;

“The contact with the head was only towards the completion of the tackle with zero impact on the head;

“The ball carrier definitely changed his position as the referee highligjted so it should only be a yellow card”.

Saena calls for a Code of Conduct to monitor the behaviour of international coaches and referees.

“There should be a Code of Conduct for coaches to be abide by, and Tony Brown has definitely used this opportunity to exaggerate things and influence the investigation by the panel, knowing Samoa is in the same pool and could be a threat to Japan in their upcoming match”.

Saena says the integrity of the World Rugby citing commissioners has been tainted by inconsistencies.

“The fact that the Russian player hasn’t been cited yet for a high tackle offence, deemed to be in ‘High Degree’ casts so much doubt on the integrity of the World Rugby Disciplinary Committee and Citing Commissioners;

“For Referee Rob Debney to publicly speak out his views is totally unfair; this should be cautioned by World Rugby and Referees Associations,” says Saena.

“The decision has been made to suspend 2 Samoan players for dangerous tackles in which the tackled player did not require an HIA. Meanwhile a dangeroulsy illegal tackle by a Russian player goes uncited even though that tackle caused a young Samoan player to end his dream of representing his country at the RWC;

“This unfair treatment warrants a civil case against the RWC organizers by the Samoan player for failing to protect his safety. This is a prestigious event which is bringing in tens of millions of dollars for World Rugby,” says Aveau.

“The Samoan player should sue the Rugby World Cup organisers for lack of investigation and disciplinary action towards the Russian player,” adds Palamo.

“Samoa Afaesetiti Amosa had become one of the most dangerous No.8’s and his services would have been sought out post RWC, thus increasing his financial value;

“Now he will be forgotten and no one will see his potential and his future and his dream has ended by a dangerous tackle that WR has failed to take any action over,” adds the former Manu Samoa coach.

Aveau Niko Palamo agrees with Saena and says that Tony Brown as Coach of Japan to put his weight behind the citing of the two Samoan players was unsportmanslike.

“That kind of behaviour is uncalled for;

“Specifically calling for the Samoans without mentioning the Russian players shows he deliberately raised the issue so that the Samoans would be cited to benefit his team;

“This kind of behavior shouldn’t be tolerated and must be disciplined with a code of conduct.”

“Japanese coaches and players are playing mind games aiming at officials and organizers to take note;

“One such issue is the Japanese prop, supported by his coaches when he publicly called out the Ireland prop, saying that he illegal steps out. This was done the day before their match with Ireland. A tactic merely aimed at the referee to take notice;

“These are very dirty and un-sportsman tactics to influence the ref and to offset the opposition or have an advantage over opponents,” says Aveau.

“Japan played well and are one of my favorite teams. They do not need these dirty tactics from coaches to ruin their flair and commitment”.