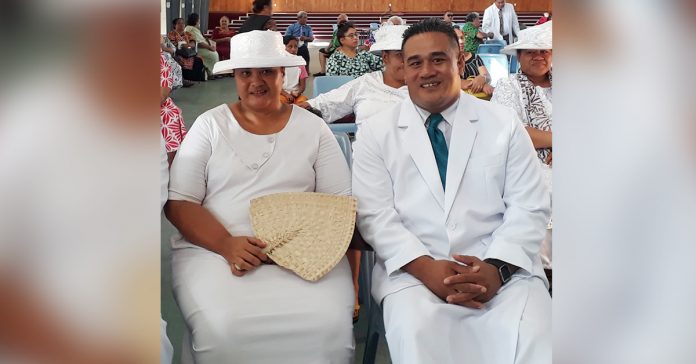 Amongst the 23 successful candidates is a name familiar to the local rugby community. Gaolo Elisara represented the Moataa Rugby Club and played for both the Manu Samoa 15s and 7s teams  in a career that spanned almost 10 years from 1988 to 2006.

Speaking to Samoa Global News Elisara said that he was first selected into the 7s after being identified in 1998 by coach Lepale Tuala Niko Palamo as he prepared Samoa for the Commonwealth Games in Kuala Lumpur.  From there, Gaolo says he then went on to play under coaches Filipo Saena, Romeo Ah Chong, Taufusi Salesa and Fuimaono Dickie Tafua.

The 41 year old had also played for the Manu Samoa 15s under Jon Boe and  Michael Jones.

Gaolo Elisara became a member of the Samoa Police after his rugby career and served for 8 years until his decision to attend Malua.

Gaolo’s wife Shirley Elisara will also be leaving her own working career to attend Malua.

“Shirley has worked for 20 years at Transam, and I am grateful to her and her family for supporting me on this journey. They have been my pillar of strength.”

Shirley Lam Slade Elisara says that the Lord has ‘made the impossible possible’ for them and shares that they have both been through a journey of changed lives.

“All the Glory goes back to God our Mighty Father for his Grace upon us. He is our Way Maker and our Miracle worker..He is the Only one who changed both of our lives..And I am forever grateful to God.”

Gaolo’s parents are both deceased but he says that it was always their dream that one of their children would go to Malua.

Asked for advice to Samoa’s youth, Elisara shared that it is easy for youth to get dragged into the temptations of life but he urges them to remember that God will never leave or forsake them.