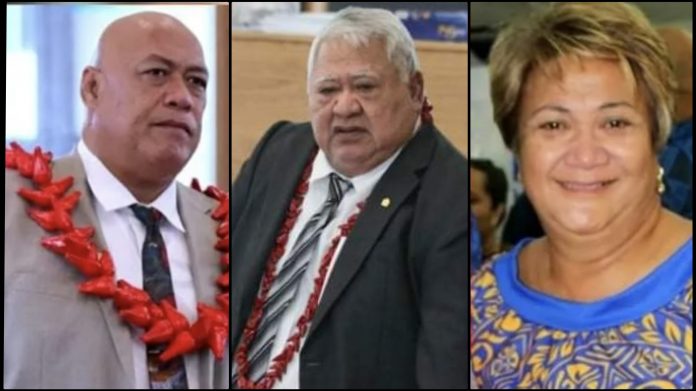 Former Prime Minister and leader of the Human Rights Protection Party (HRPP), Hon Tuilaepa Sailele Malielegaoi has been found guilty of contempt of Court alongside HRPP Secretary Lealailepule Rimoni Aiafi and senior lawyer, Maiava Visekota Peteru. In “very special circumstances” however, the Court also ruled that they “impose no penalty”.

In handing down their decision, Justices Fisher and Asher said this case was about the rule of law in Samoa, and “the rule of law means that all are subject to the law; that no-one is above the law; and that interpretation and application of the law is left to the Courts”.

The Judges go on to say that it was important to set a precent for future such incidents. “It should now be plain how the Court would deal with repetitions”. However, “on this occasion,” states the decision, “penalties would simply inflame disruptions and conflicts that have done enough harm already”.  The decision therefore expressly stated that no penalty would be imposed upon Tuilaepa, Lealailepule and Maiava – in consideration of distinguished service to Samoa, apologies made to the Court, and what they refer to as a Harmony Agreement; jointly submitted by Samoa Prime Minister Hon Fiame Naomi Mataafa and Hon Tuilaepa Sailele Malielegaoi in their capacities as leaders of FAST and HRPP respectively.

As state by the Court – “Although it is important to publicly record and condemn these contempts of court, we see no need to go further.. The current Prime Minister and FAST party are anxious to put them to bed. It is not our place to disagree”.

The Court gave “great significance” to the views Prime Minister Hon Fiame Naomi Mataafa and the FAST party had expressed in the agreement which was presented as an appendix in the Court ruling and published below.

“The agreement was in fact no more than a proposal which was never adopted by the Court,” stated the Judges . “However we have attached great significance to the views expressed in it by the current Prime Minister and the FAST party”..

“They feel strongly that it is time for Samoa to put these election arguments behind them. That would allow Samoa to unite in addressing greater challenges that lie ahead such as Covid and climate change. To that end they were prepared to discontinue the contempt proceedings altogether. If we had accepted the discontinuance it would have left the respondents without penalty”.

The Supreme Court observed that Tuilaepa had not shown leadership when the Court decided FAST had won the general election of 9th April. The judges state that instead of accepting the Court’s decision, Tuilaepa “embarked on a sustained campaign to vilify its Judges”.

“Until these events the first respondent had been regarded by many as a respected and longstanding father of the nation. When Samoa entered a period of political turmoil it was reasonable for its people to look to him as a role model”.

“For a time the campaign appeared to be successful. For several anxious months Samoa’s proud history of stability was under threat. Even now the conflicts linger”, the Court decision reads.

“We accept the evidence before us that there has been a lasting decline in respect for the law and the Courts in some quarters. That is the sorry legacy left by a formerly great leader”.

The decision states that, “In other circumstances the first respondent’s actions might have called for imprisonment. Fortunately three considerations allow us to avoid that result. First, no-one could question the first respondent’s long and distinguished service to Samoa. He is entitled to credit for that. It was only for a short period that he fell from grace. Secondly, he has expressed regret for his conduct, unreservedly withdrawn the shameful things he said, apologised, and accepted that maintenance of public confidence in the judiciary and the Courts of Samoa is fundamental”. The third consideration was the Harmony Agreement.

The Court found the public statements by the Secretary of HRPP were even more inflammatory than Tuilaepa’s. The Justices detail these statements and actions in their decision.

The Justices say in their decision that Lealailepule had failed to appreciate the anarchy that could have followed if others had continued to do what he urged, and highlighted an affidavit signed by the MP in January 2022 which they add, showed he was not remorseful.

“In his affidavit he sought to justify the statements he had made denigrating Judges. He expressed no regret for having made them. Intentionally or otherwise, the affidavit demonstrates that he still lacked understanding of the harm he had done to the social fabric of Samoa.”

The Court stated that fortunately Lealailepule’s attitude towards the Courts was dramatically reversed eight days before the trial was due to begin. “He filed the statement to completely withdraw any suggestion that the judges were biased or corrupt, withdrew any suggestion that there had been any inappropriate link between the FAST party and a Judge, unreservedly apologised to the Court, accepted that the statements he had made could have harmed public confidence in the judiciary and the Courts, and acknowledged that public confidence underpinned Samoa’s existence as a democratic country under the rule of law”.

That statement, as well as Lealailepule’s distinguished service to Samoa, and the Harmony Agreement saved the MP from penalties, states the court ruling.

The Court noted that Maiava was a solicitor of the court, and found that the scale of Maiava’s contempt was not comparable to that of Tuilaepa or Lealailepule. However, the Court noted Maiva’s apology was conditional and stated they were not impressed by it.

“In an interview broadcast on television and radio she described the Courts’ decisions as “dishonest” and said that current Prime Minister “is bold because … she has the judiciary”.

“Her views carried the extra weight expected of a lawyer. As an officer of the Supreme Court she ought to have known better”

“In her statement to this Court she said:

“Should any of my… comments… have the effect of diminishing public confidence in the Judiciary and judicial decisions I unambiguously accept that a retraction is in order” and “Should any statements made by me… including an inferred link with the FAST party, have diminished the public perception of the standing, the integrity and impartiality of the Court, I unambiguously apologise.”

“We are not impressed by conditional retractions and apologies of that kind,” said the Supreme Court Judges. “They imply that the speaker remains unconvinced”.

The Justices go on to state that Maiava had brought dishonor on the legal profession.

“The very purpose of the sixth respondent’s public remarks must have been to persuade the public that at least in that instance they could have no confidence in the integrity of the Judges. There is nothing doubtful or contingent about the effect public remarks of that kind would have had. We have found the sixth respondent guilty of contempt of court. She has brought dishonour on her profession. A penalty would have been appropriate but for the Harmony Agreement..”

The Agreement signed by Fiame and Tuilaepa saw the two leaders agreeing to discontinue contempt of court proceedings so as to not cause further disagreement and disharmony for Samoa. The agreement also paves a way for Samoa to finally move forward from the 2021 political crisis, and to allow the country to focus on more important development issues faced at this time. As stated in the agreeement:

“The two Hon Leaders have engaged in thorough discussion following the aftermath of the April 2021 General Election and the consequent court proceedings and the wider challenges that Samoa now faces. They have formed the common view that it is now necessary:

– to ensure and secure political and social stability for the benefit of all
people and residents of Samoa;
– to promote peace and harmony for the public of Samoa, which is the
prevailing public interest in light of the months of uncertainty and
disruption to the conduct of governance after the general elections
in April 2021;
– to face the current challenges to Samoa in terms of the global
pandemic brought upon by Covid-19 and the effect on the
environment caused by climate change, as a nation united under
God; and
– to recognise that Samoa is a small country with limited resources
and therefore particularly vulnerable during times of economic,
political and social instability and, further, that Samoa has a unique
culture where everyone is connected one way or another either through
family ties or matai titles;
– to restore public confidence in all the democratic institutions upon
which our government and society are founded;
– to restore and acknowledge the traditional honor and dignity belonging
to all those who lead the country, from the heart of each family, to the
villages, districts and islands; and
– in doing so seek to respect to the overarching spiritual leadership of the
various denominations of our Christian churches for the glory of God.

These contempt of Court proceedings was the last case before the Supreme Court of Samoa following the 2021 political crisis. The decision was handed down on the first day of the nation’s two week long extension to its Code Red Level 3 lockdown in efforts to combat it’s first community spread of Covid-19.