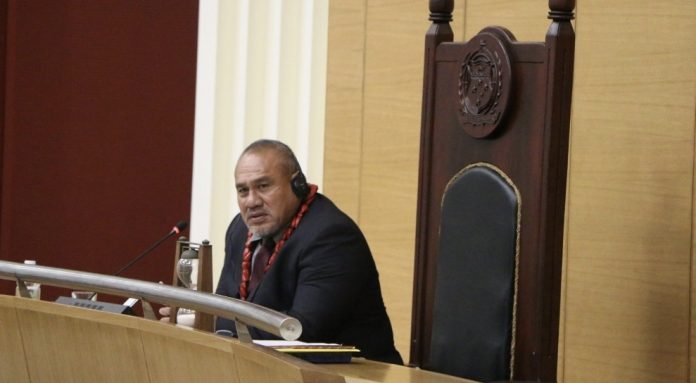 16 March 2022, Mulinuu Courthouse. Former Deputy Speaker of the House, Nafoitoa Mataia Valu Talaimanu Keti could not hold back tears as he testified in the District Court of Samoa on Wednesday afternoon.

The former MP for Gagaemauga 2 was a key witness for the defamation case against Paepaetele Junior Ernest Betham – a former police officer who accused Nafoitoa of sexual harassment and rape towards a female police officer.

The defamation case arose from an EFKS TV2 interview where Paepaetele said the former Deputy Speaker had been investigated for the alleged rape of a woman officer in 2007 – some 14 years earlier.

“But no investigation was done,” Paepaetele stated as he publicised serious accusations towards the former Speaker during a programme called, Lauao Sinasina, on the EFKS TV 2 on the 29th of March 2021.

The accusations were made just 11 days out from the April 9th General Elections, on a television network that has made its support for the Faatuatua i Le Atua Samoa ua Tasi party well known.

Nafoitoa told the Court he believed the public comments were purposely timed to ruin his chances at the general elections.

“All seven villages of my constituency called urgent meetings over the allegations made public towards me.”

The former Speaker described how he had to defend himself before matai and voters of his constituency, who were extremely unhappy with the mention of the Gagaemauga district in the accusations.

“This interview on the 29th of March,” said Nafoitoa, “ruined my family, my relationship with my constituency, and caused the downfall of my preparations towards the general elections.”

Nafoitele said the impact on him as a person, was the end of life as he knew it. “Ua uma lou ola”..

“My clean record over the 35 years and 8 months of service with the Samoa police was removed in an instant,” said Nafoitele.

The Court heard that the former Speaker served as a police officer from April 1980 until December 2015, retiring only to run the 2016 general election under the Human Rights Protection Party.  In that time, Nafoitele had moved up through the ranks, being promoted several times until he achieved the rank of Assistant Commisioner of Police.

When asked by the police prosecutor to describe the impacts of the public allegations against him, the former MP could not hold back tears as he spoke about the ordeal that came upon his family, his wife, his children and grandchildren.

In Court, the police officer at the centre of the allegations gave evidence to say that no such incident had occurred. The Court heard that the woman officer, who was granted name suppression, has been a police officer for the past 16 years and continues to serve.

At the time of the alleged incident in 2007, she was working at the Faleolo Outpost, where Nafoitele was the leading officer in charge.

She described an incident after 10:30pm one night, where she and another male officer were picked up by Nafoitele from the airport at Faleolo, to be brought back to the Outpost. The police officer said the car stopped about five metres from their Faleolo office. She said as the male officer jumped out of the vehicle, her senior, Nafoitele, asked her to stay.

The woman officer told the Court she had obeyed and stayed behind in the car, however, after about five minutes, she heard Nafoitele’s words were not appropriate. (Ua ou faalogo atu, ua le fetaui tala lā e fai mai).

She said she then jumped out of the car, and went into the office. When she was asked by two male officers what had happened, she told them Nafoitele had spoken inappropriately to her. (ua ese foi tala a le toeaina la ua fai mai).

Asked why she did not file a complaint, the Officer told the Court that it was a non-incident for her.

“Nothing had happened,” she said, “it was just words.”

Other police officers who took the stand, gave evidence about the arrest of Paepaetele. When police went to arrest Paepaetele he took off in his vehicle causing a police road chase.

According to Faatonu Leala, who had been a police officer for eight years, they chased down Paepaetele from Lefaga through Aleisa on the day of his arrest. Mr Leala said the defendant was only aprehended when the Faleata Police Outpost assisted by setting up a road block at the 3-corners going up to Dave Parker’s at Tapatapao.

The Court hearing before Loau Donald Kerslake will resume on Thursday, where the Investigating Officers of the case will give evidence. The defendant is also expected to take the stand.