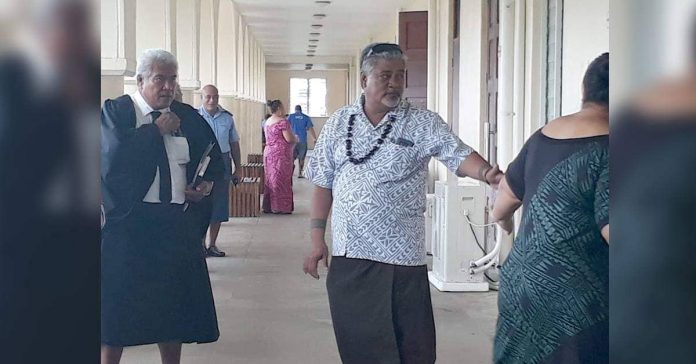 Former LTA ACEO Mata’afa Sepelini Poufa was convicted and fined $3,000 on two counts of altering with intent to deceive and four counts  of using altered documents.

The decision was handed down by Supreme Court Justice, Mata Keli Tuatagaloa this week and she also ordered the defendant to pay the full amount before 4pm Wednesday 01st May.

Mataafa orginally faced 24 charges but was only found guilty of 6 charges, the rest were dismissed by Justice Tuatagaloa.

In handing down the sentencing Justice Tuatagaloa told Mata’afa that the maximum
penalty for the charges he had been found guilty of is 7 years imprisonment.

“You were an employee of LTA as ACEO looking after the branch in Savaii and LTA is responsible for roads, road maintenance, registration of vehicles including taxis and buses, private vehicles and issuing of driver’s licenses,” said Justice Tuatagaloa.

“In January 2018 Cabinet issued a cabinet directive that all commercial vehicles more than 15 years old can no longer be registered as taxis but as private vehicles only, which means that every year there will always be commercial vehicles that will be outside, or over 15 years.

“Prior to 2018 there was no 15 year limitation for commercial vehicles.”

The Court heard that Mataafa had full access and privilege to the computer system called ALTAS in Savaii and the LTA in Upolu, and he used this access privilege to change the vehicle year for 4
taxis.

He was also found guilty of 4 counts of altering documents to register the same vehicles.

Prosecution stated that they sought a custodial sentence in their sentencing memorandum as referred to by Justice Tuatagaloa.

“For the charges of altering with intent to deceive they seek a custodial sentence with a starting point of 18 months imprisonment;

“For the 4 counts of suing altered documents they seek a custodial sentence with a starting point of 2 years imprisonment.”

Justice Tuatagaloa said that Prosecution sought a custodial sentence upon the following factors:

“They say there are aspects of forgery and dishonesty involved and there is a significant breach of trust in a managerial or executive role;

“They say that you used and abused your position to acces the computer system and make the changes you had made;

“They refer to multiple offending you committed on the 5th of December, 19th Feb and the 5th of April 2018;

“Your offending, they said, were premeditated and they also say that there is an impact of your offending on the LTA.”

Defense counsel Fepuleai Patrick Fepuleai on the other hand sought for non-custodial sentence, arguing that a monetary fine was sufficient in relation to the charges.

When Justice Tuatagaloa asked Prosecution for a response to the position of defense counsel, the prosecutor looked stunned remaining silent for almost 2 minutes before asking the Court for an adjournment.

Justice Tuatagaloa did not grant the requested adjournment, and spoke sternly to prosecution about not being able to speak to the sentencing memorandum before the Court.

“You had 24 years of service to the Government of Samoa, you are a first offender at 51 years old and you are obviously a person of good character as witnessed by written testimonies provided to the
Court,” said Justice Tuagataloa.

She then referred to the point raised by defense counsel that in Mata’afa’s case there was no evidence of any money or monetary benefit received unlike the cases prosecution had referred to.

“You had access to the computer system, you had authority to make changes on the system. The problem is that the changes you made are caught
by the law,” said Justice Tuatagaloa.

Justice Tuatagaloa told Mata’afa that his qualifications and experience were very much needed in the country and therefore a custodial sentence was not appropriate.

“Your knowledge and experience is more of use to the country as a whole and more valuable than having you serve a custodial sentence,” said
Justice Tuatagaloa.