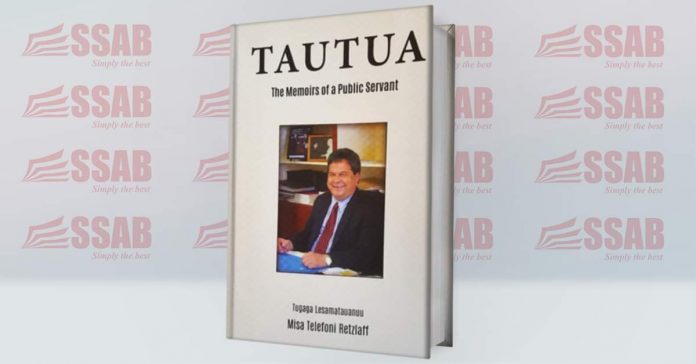 The first 100 copies of the latest book by Samoa’s former Deputy Prime Minister, Tugaga Lesamatauanuu Misa Telefoni Retzlaff have arrived into Samoa and are now on sale at Samoa Stationery and Books (SSAB).

“Tautua – Memoirs of a Public Servant” is the latest publication by the author of “Love and Money” and “To Thine Own Self Be True“.

President of SSAB Tofilau Fiti Leung Wai says they are on sale for $55 tala each and two for $100.

“We are proud and happy to support, promote and sell our former DPM’s book,” says Tofilau.

“He has contributed tremendously to our country’s development and it would be great for our people to read and know his story.”

SSAB Auckland are hosting another book signing with Misa this Saturday 12th June 2021 between 12pm and 2pm, at the Sei Oriana Gift Shop, 142 Bader Drive, Mangere.

“Back by popular demand,” they posted on their Facebook page to promote the event.

An exerpt from “Who Are the Real Criminals?” P134, Tautua – Memoirs of a Public Servant.

Below is an excerpt from an article Misa wrote for his then weekly Sunday Observer column. Dated 11th December 2005, the article was published a few months before the Samoa general elections of 23rd February 2006.

Fifteen years later, the words written by Misa seem just as relevant in Samoa today – with 28 election petitions alleging bribery against candidates filed with the Courts after the 2021 general election. The first three being heard before the Supreme Court and widely reported in the media this week.

“What is now occurring are conspiracies to entrap candidates. People are being sent out on “missions” – to entrap candidates. Standing by are lawyers and other highly paid minions ready to swing into action. Swearing affidavits, taking evidence. Some true, others clearly false..”  (11 Dec 2005)

Misa Telefoni Retzlaff attended primary school at the Marist Brothers in Apia and attended Kings College (Auckland) where he was awarded Scholars and Honours Ties. He was the first student at Kings College to win the prestigious Kelliher Economic Scholarship (nation wide) in 1969.

He graduated Bachelor of Law with Honours LLB (Hons) from Auckland University in 1974.  He won a Senior Prize in Law in 1973 and was appointed Attorney General of Samoa in 1986 and held this office until 1988 when he entered Parliament.

He proudly served as the Member of the Parliament (MP) of the Constituency of Falelatai and Samatau from 1988 until his retirement from politics and the public life in 2011.

He was appointed to Cabinet in 1992 and was to remain a Cabinet Minister until his retirement in 2011. He has held various Cabinet portfolios including Agriculture and Fisheries and he was also Minister of Health.

In 2001 and 2006 he was appointed Deputy Leader of his Party ( Human Rights Protection Party – HRPP) and as such he was Deputy Prime Minister of Samoa for ten years from 2001 – 2011. He also held the Finance and Trade portfolios (amongst others) during this period.

Internationally, he was Chairperson of the Pacific Aid Commission and was appointed President in Office of the African Caribbean and Pacific (ACP) in Brussels. He was President pro tem of the World Health Organisation ( WHO ).

Misa has been invited to deliver public lectures at Georgetown University in Washington DC and his alma mater Auckland University.

He has published a novel ” Love and Money” and also a book of his writings ” To Thine Own Self Be True “. Both of these can be viewed and downloaded on his website: www.teleconsult.ws