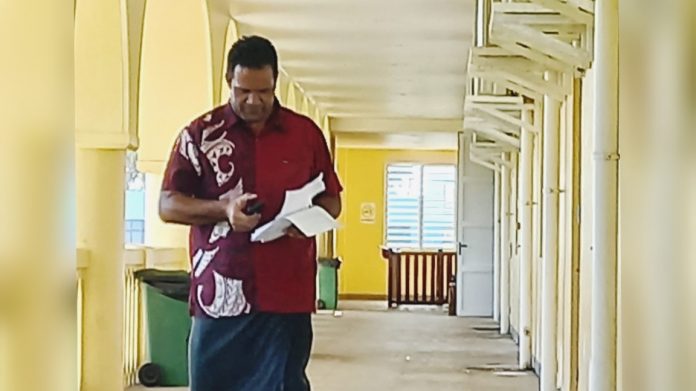 Translated from the files of #FaaSamoa. Samoa’s former Deputy Electoral Commissioner Faumui Afualo Daryl Mapu, found guilty of possession of narcotics and illegal firearms has filed an appeal against his conviction.

Faumui was found guilty after a week long judge-only defended hearing held in July before Justice Tafaoimalo Tologata Leilani Tuala-Warren. He was due to be sentenced on the 14th of October 2022 at 12.30pm as set down by the judge.

However this week during Monday morning criminal mentions, Afualo submitted an application to appeal Tuala-Warren’s decision through his lawyer, Magele Leone Su’a Mailo.

Faumui was arrested and charged along with a colleague from the OEC after a police raid of his home at Nuu Fou in December 2021.

Ms Marie Fanueli, who was visiting Faumui’s home as his girlfriend on the day of the raid, was exonerated by Justice Tuala-Warren.

“I am not satisfied beyond reasonable doubt that Marie was in possession of the narcotics, utensils, firearms or ammunition. All charges against her are dismissed”.

Faumui had maintained his innocence throughout, denying all 6 charges against him. Faumui’s defense hinged on the testimony of one Pelepesite Ta’ua – who told the Court Faumui had nothing to do with the narcotics, firearms, utensils and ammunition found in Nuu Fou. Pelepesite told the Court all these things belonged to him and Faumui was just using his room when the police arrived.

Drugs were found in the pocket of shorts worn by Faumui during the police search. However Pelepesite told the Court he also owned the pants, and Faumui had just put them on when the Police arrived.

Faumui did take the stand to give evidence in the July trial. His story collaborated with Pelepesite’s, however, Justice Tuala-Warren was not convinced and referred to a time when the pair had shared a cell at Tanumalala prison shortly after Faumui’s arrest in December last year.

States the judge in her decision – “Daryl and Pelepesite shared a cell together in custody for two months when Pelepesite was arrested on an unrelated matter in December 2021. Pelepesite admitted that during this time, they discussed the case.  This allowed them ample opportunity to discuss the evidence that they would give. The discussion of this case by Daryl and Pelepesite has a significant bearing on the credibility, reliability and the truthfulness of their evidence”.

“Furthermore, Pelepesite is not a credible witness in terms of his ownership of the shorts because he is a self-confessed drug dealer and user, and has no respect or regard for the law”.

The Court has set next week 17 October for the application for a leave appeal to be heard.